A life saver is recognized 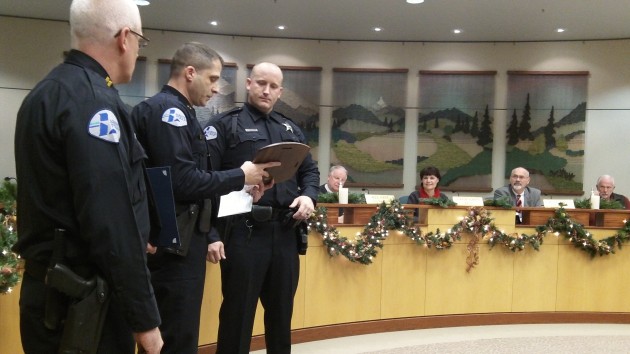 A man talked of suicide and set himself on fire near the roundabout on Albany’s Knox Butte Road last Aug. 20. Police Officer Sam Posthuma kept him from completing that plan, and for that the officer has now been honored for saving the man’s life.
Reading from a summary of the incident, Police Chief Mario Lattanzio said Posthuma was on another call on that date in August  but caught word of a call about a “suicidal subject.” Two and a half minutes later Posthuma was on the scene, where the man had poured diesel oil on himself, was lying on the ground next to a small fire and moved into the flames when the patrol car approached.

The man resisted, but the officer pulled him from the fire and yanked off his burning shorts, then got him farther away. The man, not identified by age or otherwise, sustained second-degree burns but escaped more serious injury “and is alive today because of Officer Posthuma’s attentive, quick and decisive actions,” the chief read.

Posthuma himself suffered minor burns on a hand and arm. On Wednesday night in the city council chambers, he received a ribbon, a plaque and the citation for the department’s “Non-Criminal Lifesaving Merit Award.” He also got the applause of the entire city council and fellow officers and, from Mayor Sharon Konopa, the city of Albany’s most sincere thanks. (hh)