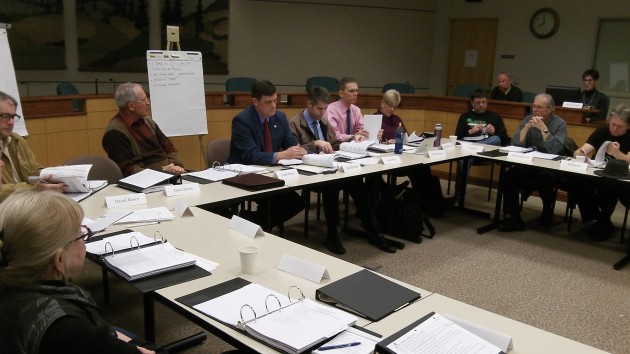 Only some of the committee members would fit in this shot.

Albany’s plans for a new police headquarters and downtown fire station will get a review of all the angles, from whether they are necessary at all to where and how they might be built. That’s apparent from the first meeting Tuesday night of a review committee co-chaired by former state Sen. Frank Morse and retired Linn County Sheriff Dave Burright, who together picked the other 15 members. (One member, contractor Ron Reimers, has dropped out, leaving a panel of 16.)
The panel intends to meet on the second and fourth Tuesdays of each month. One member, county administrator Ralph Wyatt, estimated it would take three to four months to reach a recommendation to the Albany City Council. If that proves right, the council could put a new bond proposal on the ballot in the November general election.

The council created the committee after voters last fall rejected a $20.3 million bond issue to pay for most of the costs of two projects: replacing Fire Station 11 on an expanded site, and building a new police headquarters on vacant parcel off Pacific Boulevard and Willetta Street. (Burright said he himself did not vote for the bond because he wanted more detail.)

Asked why they thought the bond had been nixed, panelists offered several theories, among them that the projects were linked instead of considered separately, the city planned to use a design-build contract, and voters were not given enough detailed information.

The members also listed questions they intend to answer to their satisfaction: Should the projects be sited where the city intended or somewhere else, how were the proposed locations chosen and by what criteria, could the existing buildings be remodeled or expanded, is the new buildings’ proposed size justified by projected population growth, and how is that growth estimated/

Panel members each got a stack of material nearly an inch thick, copies of reports the city council had received over the last few years before trying for the bond issue in 2013. All agreed with a suggestion by Morse to reach their recommendations by consensus and to vote only when consensus could not be reached. They’ll also tour the police and fire stations, and perhaps similar buildings elsewhere in the region.

Burright summarized the task ahead: The panel will take a “fresh look” at the city plans without any “preconceived notions.” (hh)


8 responses to “A ‘fresh look’ at police, fire projects”