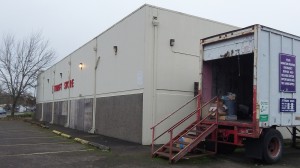 The former thrift store on Santiam Road. The Salvation Army still operates a donation trailer there.

If you’re tired of having to wait your turn at the bottle-return stations of Albany supermarkets, you will welcome a proposal to establish a central redemption center of the kind already operating elsewhere in Oregon.

The Salvation Army has asked the city to allow a “bottle bill” recycling center at the former and long-vacant Salvation Army thrift store at 1224 Santiam Road S.E., a property which has not found a buyer for six years. The Oregon Beverage Recycling Cooperative would like to remodel the boarded-up building as a redemption center open seven days a week and staffed from 9 to 6.

Operation of the center would enable retailers within two miles — only Wal-Mart is outside that radius, the planning commission was told — to close their own recycling devices. Customers could take their empties to the center to be counted either automatically or by staff, or they could arrange for “premier service,” which allows customers to drop off a bar-coded bag for a credit on the customer’s card to be redeemed at area stores.

A zone change is needed to allow the center, and the planning commission has initiated the process. Planner David Martineau reports the commission has tentatively scheduled a public hearing on Jan 6, 2014, which would then allow the change to go to the city council on Feb. 12. People who don’t like feeding cans into those slow machines — and therefore put them in with the recycling, forgoing the deposit — can hardly wait. (hh)

2 responses to “A “bottle bill” redemption center? Make it quick!”