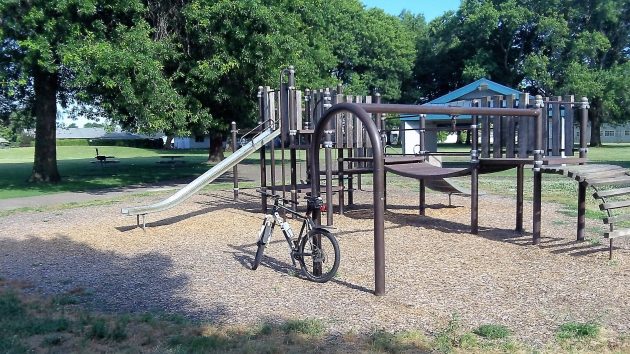 If there’s evidence of hydric soils, I didn’t see it under all that bark.

You’re looking at the playground in Albany’s Sunrise Park.  But it’s more than that. It’s also an exhibit in the story of how bureaucracy expands when it’s allowed to distort a well-intended law.

For at least three years, Albany has intended to restore Sunrise Park. In 2013 it announced its intention to use federal antipoverty money to help pay for the project because the park, just south of Sunrise School, is in one of the city’s poorest census tracts. But so far, this project to improve the lives of residents by making the park safer, more fun to use and less prone to vandalism has been held up.

The reason for the delay: Roughly half of the 3.16-acre park, including the playground area covered by a layer of bark mulch, has been designated as a “wetland” under the state’s definition. Like any level piece of ground in the Willamette Valley, part of the park probably collects a little rainwater in the winter and gets soggy enough to develop “hydric soil.” Under state rules the presence of such soils is one of the indicators that a wetland exists.

The city wants to establish a small parking area that would make the park easier for residents to reach and police to patrol. It also wants to replace and move the playground, judged to be out of date, and to make other improvements. It can’t do any of those things until it gets a permit from the Department of State Lands. The parks department could avoid the wetland issue if it changed its plans, but that would mean giving up to best way to meet the goal, which is a better and safer park for the neighborhood.

Parks and Recreation Director Ed Hodney told me the city is still dealing with the state, seeking a solution. But in the end, the city may have to spend some of the money for the park project to buy credits in a so-called wetlands bank. (This is what Albany had to do for its new police station site. Albany paid Eugene $164,307 for credits, the price of covering up 2.86 acres of wetlands.)

The state is acting under a law (ORS 196.795-990), which requires people to get a permit if they “plan to remove or fill materials in waters of the state.” There is no water in Sunrise Park, just as there is no water on the police site. So what’s the deal? The deal is that over time, the intent of the law has been turned upside down. In these cases it now deals not with water but with land.

The state explains: “The purpose of the law, enacted in 1967, is to protect public navigation, fisheries and recreational uses of the waters.” If that was the purpose, and it was a good one, where does the department get off declaring that “‘waters of the state’ include wetlands on private and public land.” Especially when those alleged wetlands have no bearing on navigation, fisheries and water sports?

Albany and everybody else goes along with this charade because while it’s expensive, it’s less expensive than a prolonged court fight that challengers might well lose, knowing how deferential our courts have become to edicts of the administrative state.

The expense of wetlands delineation and mitigation would be OK if it actually preserved important parts of the ecosystem. But in many cases it does not, as we’ve seen, and this regulatory scheme deserves to be overthrown. (hh)

Postscript: Anne Catlin of the Albany Community Development Department has clarified the timeline in the Sunrise Park project: “It sounds like we have been dealing with the federal bureaucracy for three years. Not exactly true. To clarify: The City applied for and received federal funding in December 2013 to replace the park equipment. This project got rolling in spring/summer of 2014. The project grew to include the parking lot in 2014, and I had to redo the environmental review, which included hiring a consultant to do a wetland delineation. There were delays in getting the wetland delineation done (weather, availability of consultant, etc.) and then delays getting engineering calculations from consultants to submit the wetland removal and fill permit.”