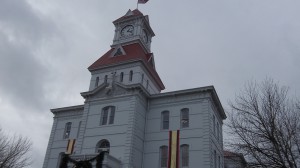 The Benton County Courthouse in December 2012.

Fifty years in prison. Is that too much or too little — or just right — for having snuffed out the lives of a young woman and her one-year-old son? I don’t know, but I do know that 50 years is a very, very long time, and I can’t imagine being imprisoned for that long. In Benton County Circuit Court, 50 years was the prison term imposed on a former Oregon State University student from Peru who now is 22 and was arrested when he was 20. He was convicted of killing his Philomath girlfriend and the baby the two had together after the girl, 19 years old, told him she was leaving him.

According to the report in the papers, the sentence was a compromise between the defense, which had wanted a 30-year term, and the prosecution, which threatened to seek the death penalty.

The defendant was described as a normally sensitive and compassionate guy. I’m wondering whether he may regret the sentencing choice to which he agreed. His life is over in any case. He forfeited any chance at a normal life when he committed those crimes. If he had insisted on a sentencing hearing, he might have been condemned to death, which in Oregon means an inmate spends most of the next 20 years or so in an individual cell while the appeals drag on.

Maybe what he was really afraid of was the alternative for a jury reluctant to impose death. For aggrevated murder, that alternative is life in prison WITHOUT any chance of parole, even after 50 years. (hh)

From Gil Helvie: I believe the answer is to to begin obeying the law relative to capital punishment here in Oregon.  Today’s culture has no problem with killing babies in the womb, even up to and including birth.  Murder is murder!