Why hearings on steps, door? It’s the code 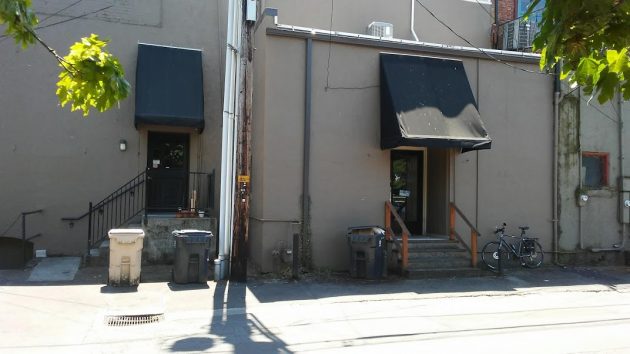 The back of 301-302 First Ave. N.W.: The wooden steps at right will be replaced with the blessing of Landmarks.

The Albany Landmarks Advisory Commission spent only about half an hour Wednesday night to conduct two “quasi-judicial” public hearings and then approve minor alterations on the alley side of buildings facing First Avenue.

So why hold public hearings on routine matters like this in the first place? Because, planner Laura LaRoque and planning manager David Martineau told me afterwards, the Albany Development Code requires a full-blown hearings process when commercial buildings in the historic districts are involved.

Except for the code language, such routine matters could be handled at the staff level without extensive staff reports and public hearings, which would save both the planning division and applicants work, money, and time.

As it happens, Albany’s development code currenly is undergoing a review to streamline the requirements and remove complications. But the section dealing with the review of exterior alterations in the city’s historic districts is not included. Why not? Not important enough, is the impression I got.

On Wednesday, the Landmarks board quickly and unaniously approved plans to replace four wooden steps behind 305 First Ave. N.W. and install a new door in the back of 201 First Ave. N.W. The staff reports including illustrations and exhibits ran to 14 pages in one case and 16 in the other.

The Landmarks mission is to preserve, to the extent practical, the appearance of Albany’s historic districts. The board came under fire from the city council last year when it delayed the demolition of three dilapidated old houses owned by Mark and Tina Siegner at Fourth and Calapooia. In another case it also debated at length whether a small shed was historic and should be saved or was not historic and could be replaced.  (The shed eventually was allowed to be replaced, and following a council decision on June 26, the Siegner houses came down the next day.)

Architect Bill Ryals, the only Landmarks member who voted to allow the Siegner demolition last year, Wednesday renewed his push to put a more solid foundation under the group’s deliberations and decisions. He suggested asking the council for funds to engage consultants on historic preservaton and upate the inventory of Albany’s historic structures.

With apparent reference to remarks made on social media, Ryals also admonished his fellow commission members to conduct themselves in a professional manner.

The discussion went on for some time. If you’re interested in the architectural heritage of old Albany, it’s worth taking it in. The audio recording of Wednesday’s meeting should be posted on the Landmarks web page by the end of this day (July 11). (hh)


2 responses to “Why hearings on steps, door? It’s the code”