Street scene: Why that ‘center’ line is off center

Written May 11th, 2021 by Hasso Hering
Comments: one response. 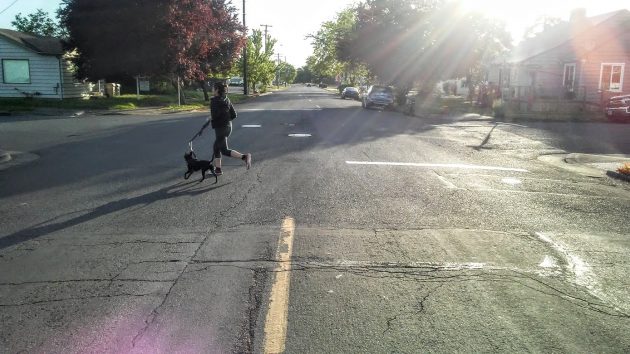 Tuesday evening at Seventh Avenue and Hill.  The point? See the far center line and read the story.

Why, Bill McLagan wanted to know, did they restripe Seventh Avenue near Hill Street in Albany some years ago so the center line was no longer in the center? Good question. If you notice it at all, it certainly looks odd.

“It creates a problem with parked cars on the north side of the street and I always ignore it,” McLagan wrote in an email. “But why did they do that? It makes no sense. Perhaps you can find out why.”

I vaguely remember us doing a story in the paper when this became an issue a long time ago. But for the facts, I turned as always to Ron Irish, the street and transportation expert at Albany City Hall.

The striping change, Irish says, happened some time after 2010, and the cause was an ODOT safety project that closed the Seventh Avenue on-ramp to the Pacific Boulevard overpass to all but emergency vehicles.

The on-ramp closure forced trucks from the industrial area near the county jail to go two blocks farther east on Seventh in order to take advantage of the light on Pacific at Hill. And so, says Irish, “We shifted the center line of the eastbound Seventh approach to Hill north a few feet in order to provide room for trucks to make the movement without ‘cheating’ into the opposing lane of traffic.”

You can see, more or less, what it looks like from the seat of a bike in the video below. And while it helps trucks turning on Hill, evidently it’s not uncommon for drivers making the turn from Hill to cross the off-center line. (hh)


One response to “Street scene: Why that ‘center’ line is off center”