My choice this morning was between watching the Windsor Wedding on TV or reading the city of Albany’s Capital Improvement Plan for 2019-23.  The CIP won. And I learned a thing or two.

For one thing, the city’ plan calls for repaving the notoriously bumpy 10 blocks of Fifth Avenue between Lyon and Main streets. That’s the good news. The bad news is that this won’t happen until fiscal year 2022-23.

Also, though, the plan projects paving projects on a bunch of other streets that are in much better shape. And they’ll be done sooner.

Salem Avenue is one example. It’s a pretty smooth road, allowing lots of traffic to move along at a brisk speed. From the Union Pacific track northeastward past Waverly Lake and on to the city limits, Salem Avenue is planned to get a “2-inch asphalt grind inlay” as early as next year, in the 2019-20 fiscal year.

Why spend money on streets in fairly decent shape well before repairing the ones that are really bad? Because the city wants to keep the major roads, the ones carrying a lot of traffic, like Salem Avenue, in pretty good shape so they don’t break down to the point where repairing them would be much more expensive.

It’s hard to argue with that approach. But it does explain why streets like Fifth, relatively little used, get so bad before anything is done.

Throughout this plan — relatively dry reading compared to the ceremony in England, I’m sure — the city engineers and managers make the point that all the money needed to properly maintain the streets and other systems, such as storm drainage and parks, just isn’t there. So the city is falling further behind with every passing year.

If you want the grim details, turn off the TV and read the plan, especially the introduction by City Manager Peter Troedsson, here.

What Albany — and other cities in the same boat — should have had for the last generation or two is a rigorous system of funding depreciation. So that when something needs fixing, the money’s there to fix it.

You’d think that we would have learned from this particular failure to provide for the future. But we haven’t. Look at all the nicely paved streets in all those new subdivisions, paid for by buyers of houses along those streets. But nobody is paying money and setting it aside so that the streets can be repaired when, in 30 or 40 years, they have worn out. (hh) 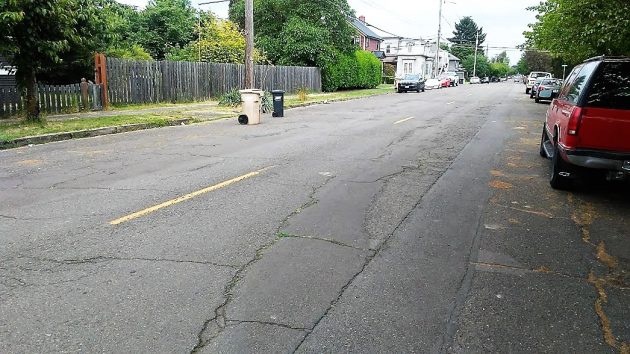 Pavement is in rough shape on this segment of Fifth Avenue east of Lyon Street. 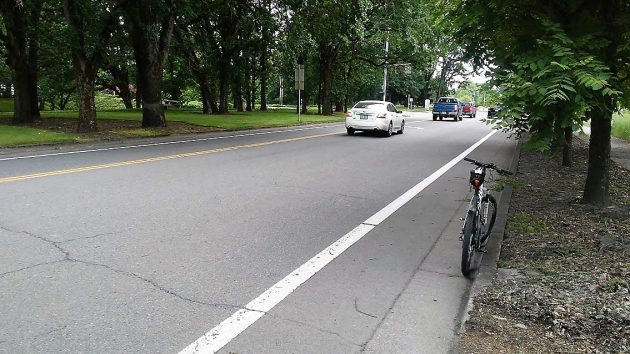 Whereas Salem Avenue, scheduled to get repaved sooner than Fifth. is in fairly good shape.