See how clear of vines this path is now

As I say above, today I found the Dave Clark Path on Albany’s Willamette Riverfront cleared of the blackberry bushes and thorny vines that threatened to snag walkers and bike riders the last few weeks. 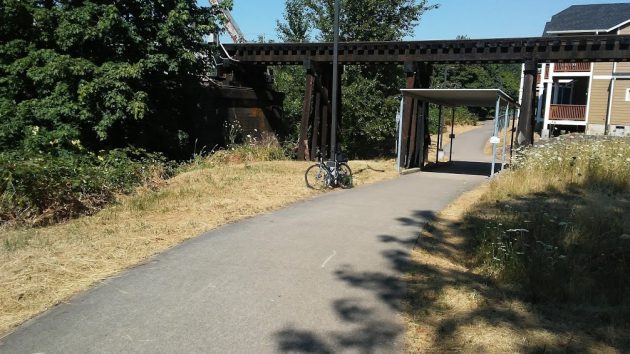 Presumably this was the work of the Albany Parks Department maintenance crew. I can just imagine that they have been overwhelmed with work as everything in every one of Albany’s parks has been growing this summer and growing fast.

A few days ago I noticed and wrote about a city-owned lot overgrown with grass and Queen Anne’s Lace. That lot, in the middle of the Edgewater Village development just off the Clark Path, also had been cut today. (Too bad. That’s one place where tall weeds served as a useful ground cover and a place to support pollinating insects.)

The berry bushes along the Clark Path were a reminder that these paths, nice as they are, require repeated maintenance. If they just sat there year after year, pretty soon they could no longer be used.

A commenter on hh-today recently suggested that we, the users, should do our part. Yes, we should. But the kind of maintenance that’s required can’t be done without power tools and vehicles to cart the refuse away. It’s not the thing that casual volunteers can do as they saunter along the path.

Anyway, here’s a look at the Clark Path today without all those thorny vines. The thumbs-up at the end is meant to say “good job.” (hh)