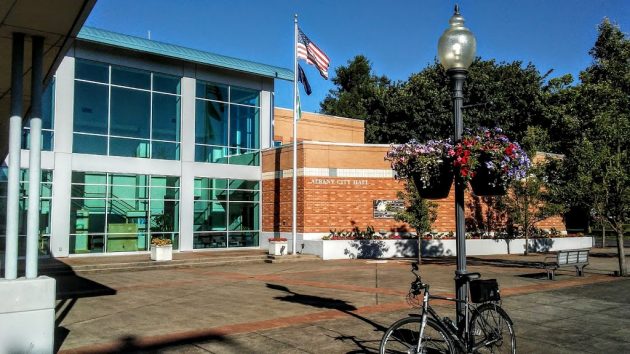 Albany City Hall on a nice evening in June 2020.

The first two days of candidate filings for Albany City Council produced a couple of surprises. Well, at least they were surprising to me.

The filing period opened Wednesday, and the first person to show up on the list of candidates was Marilyn Smith, who retired in June after many years of working at City Hall as a management assistant and public information officer. She filed for the Ward 3 seat held for two terms by Rich Kellum.

The second surprise: Ray Kopczynski wants to rejoin the council in Ward 2. He was on the council for nearly two full terms after being appointed to a vacancy, but he didn’t seek re-election in 2018. Now he’ll be on the ballot again, having filed on Thursday.

Keith Kolkow in Ward 1 and Jill Van Buren in Ward 3 announced their council candidacies on Facebook weeks or months ago. They too made it official by filing on the second day.

Kolkow is a member of the Albany Landmarks Commission, whose decisions on property at Fourth and Calapooia have twice been overturned by the council.

Van Buren is retired from serving many years as the elections supervisor of first Linn and then Benton County.

Kellum has not said whether he’ll seek his third four-year term representing Ward 3. In Ward 2, Bill Coburn this year is finishing his third consecutive term. And in Ward 1, Mike Sykes is completing his first. They haven’t announced their plans either.

Also on the candidate list after the second day of the filing period is Sharon Konopa, seeking her seventh consecutive two-year term as mayor. (She spent years on the council before becoming mayor.)

For Albany city candidates, the filing period for the Nov. 3 election runs until 5 p.m. on Aug. 20.

What are the questions Albany city candidates should expect to be asked?

How about: Would they ever vote to close the Carnegie library downtown? Would they support using CARA urban renewal money to expedite moving and restoring the former Cumberland church? What’s the right maximum size of an accessory dwelling unit, 750 square feet as the mayor insists or 900 square feet as four councilors want? And, not to remain too parochial, do they agree with the current claims about racism in America, and if so what should Albany do?

There are other issues, obviously, but these should be a start. (hh)