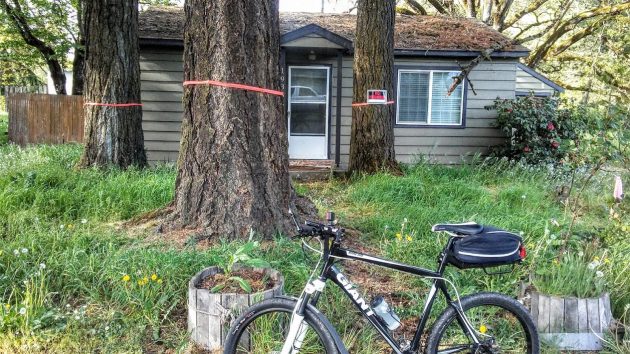 This is one of two vacant houses on Linn Avenue N.E. that will be razed to make way for “The Banks” apartments. The trees will go too.

On the Albany riverfront, a Salem contractor is getting ready to prepare the site for construction of “The Banks,” a 120-unit apartment complex.

The riverfront is my beat, as I may have mentioned. And I noticed the signs of impending activity on a bike ride Sunday.

In the one block of N.E. Linn Avenue that abuts the 6.2-acre riverfront site of the apartment project, several big Douglas firs have been marked with red tape, presumably designating that they’ll be felled

On April 22, CD Redding Construction, of Salem, filed permit applications for the demolition of two small houses on Linn Avenue. The houses, at 1925 and 1935 Linn N.E., have been vacant for some time. They are in the way of one of the three-story apartment buildings planned for the site.

The demolition permits are still “pending,” according to the information available Sunday night on the website of the city’s Building Division.

Also still pending are permit applications for the nine buildings in the project, all filed on Feb. 9. Permits for site improvements and new construction in the floodplain were filed in early March.

The property, most of which is a former industrial site, is owned by Willamette River View Holdings of Salem. The Albany Planning Commission approved revised plans for the project on Feb. 1.

Among the conditions mentioned in the building permits is that the developer must dedicate a 16-foot-wide easement where the plan calls for a shared path along the bank of the Willamette River. The path will replace an unimproved track that now runs along the river frontage of the property.

The trail connects Bowman and Simpson parks on the river. No word on whether the trail will remain open for public use once the construction starts. (hh) 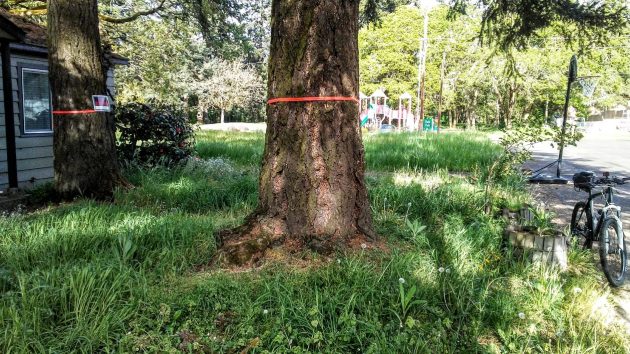 Eads Park is in the background of this view along Linn Avenue.