Meanwhile, back in the yard … 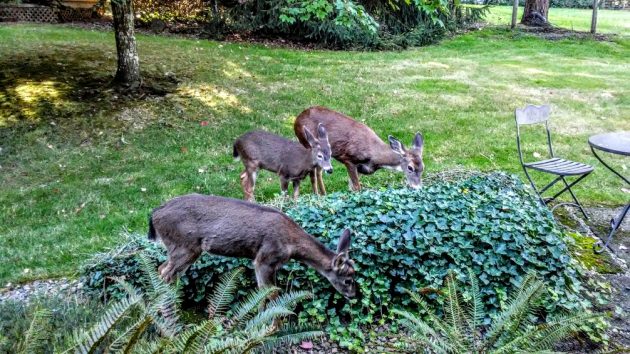 They say that ivy is an invasive species which takes constant and repeated work to control — unless you have hungry helpers like these.

The battle against ivy never ends, it seems. You think you’ve won and pay no attention for a year or two. And then it’s back. (Kind of like politics and elections, I guess.)

On the ground like this, ivy may not be a big deal if you want nothing else to grow there. But if it climbs up trees and is not controlled, the trees will eventually die. The answer is to cut the vines all around the trunk, without damaging the bark, and then pull out the ivy’s roots if you can.

More advice from the online world: When you cut the stuff, put the cuttings in a plastic bag and in the trash. Because if you leave them lying around, they can sprout and all your effort is for naught.

For all its faults, ivy seems to have one thing going for it: Deer like to munch on the leaves. So as long as these three and the rest of their seemingly growing herd keep coming through the yard on a regular schedule, this little patch of ivy is not going to invade much else. (hh)


4 responses to “Meanwhile, back in the yard …”