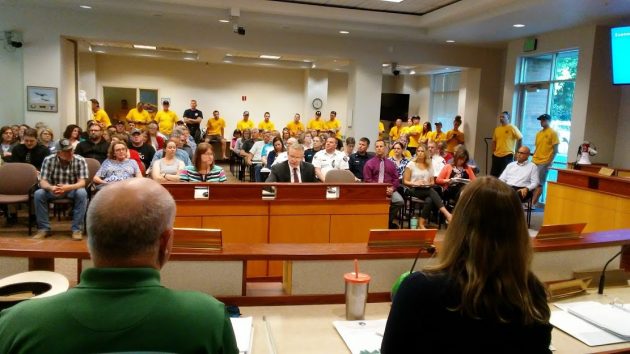 An Albany city budget meeting last May. A public service fee was not yet an issue.

There’s been a lot of public discussion about possible monthly Albany utility fees to shore up future city budgets, and Mayor Sharon Konopa says she’d like to make her position clear.

“The chatter over the fee is accusing me of wanting a 60 dollar a month fee,” she wrote in an email Friday. “I am used to being accused of all kinds of disagreements over issues, but have you ever heard me support anything over 10 dollars?”

As a matter of fact, no, I haven’t heard the mayor mention any specific amount.

“The 60 dollar amount was from staff stating that amount would be needed to eliminate the levy tax,” the mayor added. “So the net cost to the taxpayer would be less than 60 per month.”

All the talk about an added city fee — either for streets or for general-fund services including police, fire, libraries and parks — seems kind of abstract until the city council makes a move. So far, a majority of four is opposed to levying any fee without putting it to the voters. And judging by public reaction so far, an election would probably kill extra city fees for a good long time.

In November, the council got a detailed staff report on city budget history and trends, including potential city fees and how much money they might raise for what.

For example, a public service fee might be intended to replace the $4.5 million annual local-option tax levy to augment the police and fire budgets and also meet the needs of other departments. That would suppose a revenue target of $13.5 million per year. If the fee was collected uniformly from all utility accounts, residential and others, the fee would need to be $63 a month. If it was based on the size of water meters, the monthly fee would range from $54 for the smallest meters to more than $4,000 for the biggest.

A fee intended to raised $9 million a year to cover the anticipated shortfall while leaving the police and fire local option tax in place — if voters renew it — would be $43 if collected uniformly. It would range from $35 to $2,722 if based on the size of water meters.

These numbers do not include a potential fee to raise money for street repairs. For a single-family residence, a flat street fee intended to raise $3.1 million would be about $15 a month. If the revenue target was $5 million, the fee would be $24.

If based on the number of trips generated by different kinds of utility customers, the residential fee would range from $6 to $10 a month for the lower revenue target, or $10-16 a month for the higher one.

Among many other details in the presentation, there was this: The average Albany city employee costs $115,000 to $150,000 a year in wages and benefits, resulting in $3 million of additional costs per year.  That’s the same amount, $3 million, as the total city library budget.

We’ll hear more about all this later on. But if the mayor is serious about limiting the monthly amount to $10, the whole discussion of new city fees won’t solve much even in the unlikely event that the council majority relents. (hh)