Lowe’s wants to change the deal 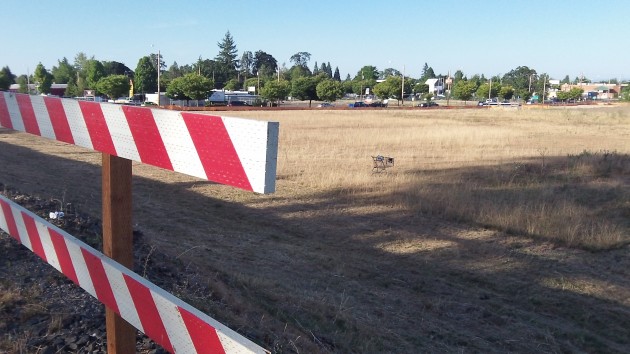 A lone shopping cart on the vacant Lowe’s site: Maybe it’s a start.

Lowe’s proposal to build a store at Ninth and Oak Street has been an expensive proposition for the city of Albany so far. The city spent around $5 million on street work and related improvements, in return for which the company promised in its development agreement with the city to have the store open by the end of 2014. Now that the timely opening is not going to happen, the company wants to change the deal.

Lowe’s request is on the agendas of the city council’s work session Monday afternoon and the regular meeting Wednesday night. The company wants to open the store a year later, by Dec. 2015; to build it 35 percent smaller than specified in the original agreement; and to be forgiven the $1,000 daily penalty for not opening by Dec. 31 this year, a penalty that will reach $365,000 if the store does not open before Dec. 31, 2015.

For the council. it’s a tough decision. If it tries to enforce the original deal, it’s possible the store won’t be built at all and all that street money will have been spent on improvements that could have been done later or not at all. If the council agrees to the changes, there are still no guarantees.

The experience so far reminds us all that an agreement can be broken. With that in mind, it’s possible Lowe’s might refuse to pay the $1,000 a day (up to $2 million if the store is never built), and the city would have to sue the company. That would be Albany suing the second big company for failing to live up to its promises to build something in town. Pepsi subsidiary SVC was the first. Not exactly the best way to attract employers, is it?

In the world of business, especially big corporate business where decisions are made by executives far away, and where decisions are necessarily influenced by sudden economic changes, expansion and construction plans do have to change now and then. That can be a problem especially when the lead time imposed by the jungle of state and local regulations — on transportation and wetlands and so forth — runs into years.

If the approval process could be dramatically cut short, dilemmas like this would not happen because development agreements would not be needed. Public improvements and the commercial venture making them necessary could be built at the same time. Neither the private business nor the public would have to promise anything, so there would be no promises on which to go back. (hh)

5 responses to “Lowe’s wants to change the deal”