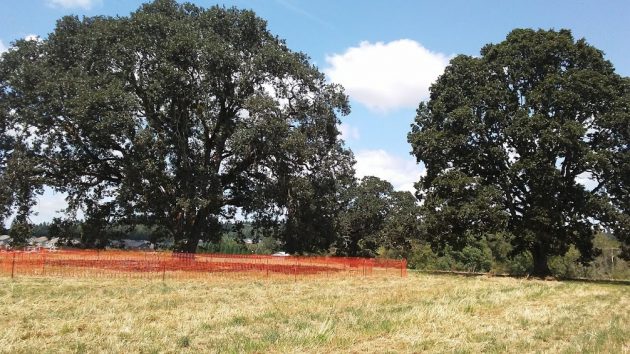 On Saturday, orange netting surrounds one of two oaks the Pheasant Run developer is saving.

Contrary to persistent chatter on social media, it’s not the prospect of more tax money that is causing Albany officials to approve big subdivisions like the controversial Pheasant Run in North Albany.

New housing does add to the the city’s tax income, but as a rule the expense of public services grows faster than population growth, especially growth in single-family developments. No, what fuels the growth is a demand for housing combined with zoning and a development code that allows subdivisions that meet the rules.

Now that construction of the first phase of the (cynically named) 147-lot Pheasant Run subdivision has started, on the west side of Crocker Lane, there’s been an eruption of bitter criticism on a neighborhood online forum. The critics largely blame lust for tax income for the council’s appoval of housing that makes traffic congestion worse than previous subdivisions had already made it.

But consider some numbers. Assume that each of the 147 houses eventually to be built in Pheasant Run is valued on the tax rolls at $250,000. The city’s permanent tax rate plus public safety levy is about $7.55 per thousand. At that rate, the annual tax income to the city from the entire subdivision is about $277,000. It’s something, obviously, but compared to total tax receipts of about $27 million in the second year of the current biennum it’s a drop in the bucket.

Once each house it built, the city will also collect systems development charges for future street, park, water and sewer system expansions. Current SDCs total $7,863 per house, or under $1.2 million for the whole development. A nice sum, to be sure, but no game changer when it comes to the cost of expanding each of those systems as the population grows. (The partial rebuilding of North Albany Road alone cost more than $6 million a few years ago.)

If people want to blame somebody for the growth of traffic and loss of countryside in North Albany, they should blame all those (including me as an editorial writer) who pushed for the annexation of North Albany in 1991, and the voters who appoved it. The subsequent zoning of the territory for residential development — what else was a city going to zone it for? — sealed the fate of what had been a few scattered neighborhoods surrounded by farm fields and woods.(hh) 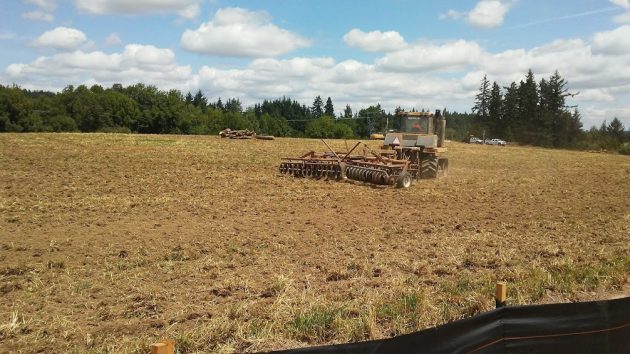 In the distance, a pile of logs that used to be a big oak at Pheasant Run on Saturday.

25 responses to “It’s not taxes that fuel N.A. growth”