In the dark: Look at those sculpture lights 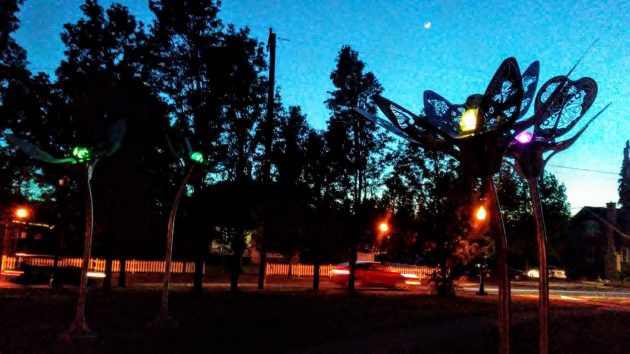 Street lights compete with the colored wildflower lights under a crescent moon at about 9 p.m. Friday.

For weeks the colored lights on Albany’s steel wildflower sculptures had been giving the city fits, in the words of Rick Barnett of the parks department. But now the one light that refused to work before has been fixed.

The lights are where the petals would be if these 12-foot structures off Lyon near Eighth and Ninth were actual flowers. They light up in changing colors, and sometimes they kind of flash.

The sculptures, a public art project funded as part of the city’s police headquarters construction, were installed last December. One of the lights conked out or never worked.

A new light was ordered. When it eventually arrived, maintenance supervisor Tom Valentino said, “we found a bad cable going to the same flower.”

But this week, Barnett, the parks and facilities maintenance manager, was able to report this: “Fingers crossed. We found and fixed an electrical problem that should make those flowers work like they should — every night — for a long time without problems.”

I waited till after dusk on Friday night to take a look. Note to self: I you want to film something after dark, next time bring a light. Anyway, the result is below (hh)


2 responses to “In the dark: Look at those sculpture lights”