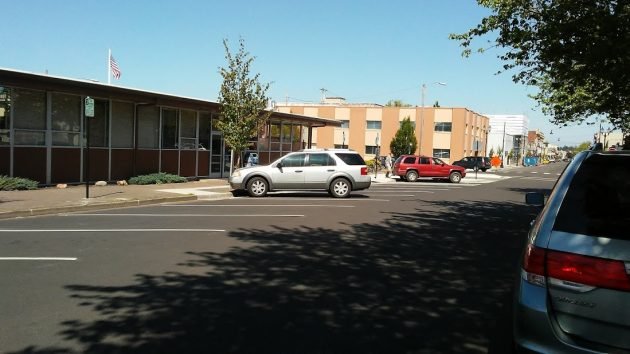 Monday afternoon outside the Albany Post Office: The unusual and often ignored back-in parking requirement may be one example of the council and people wanting different things.

The crushing rejection of Albany’s local fuel tax Tuesday may be just the latest example of the majority of council members and a majority of their constituents not being on the same page.

The defeat of the 5-cent-a-gallon local fuel tax to repair streets was to be expected. Who wants to pay even more when gas is already going up pretty fast and the state fuel tax is already set to rise in steps over the next few years? But two-to-one against in North Albany, and 70 percent against in the Linn County part of the city? It wasn’t even a contest.

A majority of the council put the tax on the ballot. But if they hoped the thing would pass, they clearly had no idea of what the voting citizens in town are willing to accept.

On Monday I took yet another snapshot of somebody unwilling or unable to park by backing in on the left side of Second Avenue outside the post office. That parking scheme, adopted by the urban renewal board including the council at one meeting without any public input at all, also was a case of being out of touch. The council accepted the staff’s opinions that there were certain theoretical safety advantages to this arrangement. It was evidently unaware that many of their long-time constituents are no longer able to crane their neck back as far as they could in their 20s. And the council has steadfastly ignored negative public reaction for more than a year.

While the gas tax election was pending, the council and other members decided to spend an additional $444,000 in order to do a complete reconstruction of seven blocks on two downtown streets. This is part of the roughly $9 million downtown streetscape project that’s been going on for two years. If voters paid attention, they might have scratched their heads. Those blocks were already scheduled to be repaved. Why spend hundreds of thousands more on a super job for seven blocks when all over town, many streets are in truly terrible shape because there’s no money to fix them?

The fuel tax election also was on the horizon when the city installed a series of expensive but completely unnecessary “catenary” lights to swing above those prettified streets downtown. Not only did those swinging lights add to the tax-paid cost of the streetscape project, but they shed no added light on the already newly and brilliantly lighted streets. (And some of us think they’re ugly too.)

The city of Albany does have a real problem coming up with the money to pay for decent streets. But if voters are ever expected to approve additional revenue, the council first has to establish a long and consistent record of not spending money on stuff that most people don’t think is necessary or wise. (hh)


30 responses to “Fuel tax defeat: Council out of touch”