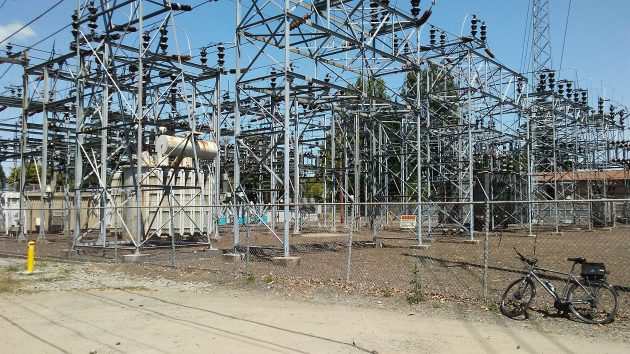 The outcome wasn’t in doubt,  so it was no surprise this afternoon when the Hearings Board of the Albany Planning Commission unanimously approved the expansion of Pacific Power’s Hazelwood substation.

The utility, still officially Pacific Power & Light on the tax rolls, owns five tax lots between Queen Avenue and 17th Avenue S.W. The substation occupies about two-thirds of the acreage, and now the company will build a new so-called “ring bus” on the rest, which means demolishing a long-vacant house on the property.

Nicole Schukow, a neighbor on 17th, supported the application and welcomed getting rid of the dilapidated house. But she asked that Pacific make sure to clean up after itself when the construction is complete. Apparently there was debris and gravel lying around after another project.

Another neighbor, Jeffery Reams, whose house is directly east of the expansion area, had questions about a retaining wall and fence adjacent to his property, and he got them answered.

Garrett Stephenson, a Portland-based lawyer for Pacific, summed up the reason for the expansion. The new ring bus, an arrangement of electrical equipment, is intended to ensure reliable service and correct current deficiencies in that department. “It’s not an optional thing.”

Further, the equipment requires a certain amount of space around it. The utility could build a new substation somewhere else, but that likely would mean condemning houses. So it makes sense to expand this station instead.

The hearings board met in a remote session, via the Internet, from different locations. Board Chair Dala Rouse ran the hearing from a room at City Hall, where she was joined by the planning staff.

As part of this project, Pacific Power will have to build a sidewalk along its frontage on 17th. Schukow, the neighbor a few houses down, wanted to know if sidewalk and curbs would be extended down the street to provide drainage. But no, the rest of largely unimproved street will be left the way it is.

One question left unanswered in the 45-minute hearing: When will the construction start, and when will it be complete? (hh)


7 responses to “For better reliability: Board OKs PP&L project”