For an Albany rail fan, a sight to enjoy 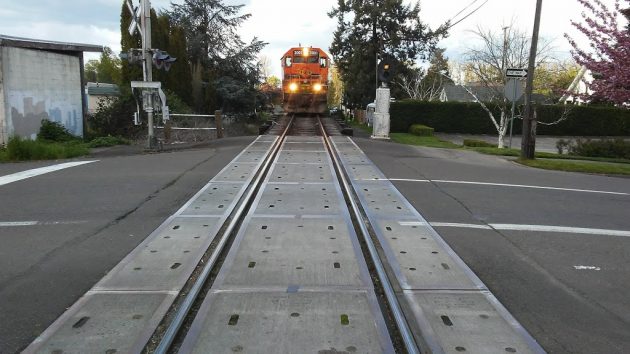 In case you hadn’t noticed over the years, I enjoy watching railroad operations. And Albany is the place to be in that regard, since the town is crisscrossed with functioning rail lines.

On Saturday afternoon, I found myself at the Second Avenue crossing of the Portland & Western line from Corvallis. A locomotive was idling just short of the street. This “consist” or train of six locomotives, two of them B units without cabs, had come across the river and was waiting for a signal to proceed.

The train was headed, well, I don’t know where. Eventually it turned right at the wye, so apparently it was going to the Albany yard.

For a rail fan such as me, it was impossible not to get off the bike. I leaned the wheels against the real estate office next to the track, grabbed a couple of stills, and then attempted the short but noisy video below when the crossing arms came down and this short train got on its way. (hh)

5 responses to “For an Albany rail fan, a sight to enjoy”