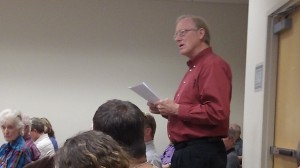 At the urging of local members of Health Care for All-Oregon, the Albany City Council has let itself be pushed into backing a Democratic proposal before the legislature on health care.

The council Wednesday passed a resolution backing HB 3260. It would require the Oregon Health Authority to conduct a study of different health care financing schemes. The options to be studied would be a single-payer system like that in Canada, another allowing people to choose between private insurance and a publicly funded plan, a third that fully carries out the federal Affordable Care Act (Obamacare), and a publicly funded system paid for with a sales tax.

The Health Authority estimates that based on comparable work in New York state, the study would cost about $600,000, and the bill says it would be done only if donations or grants pay for it. My question: If New York already did it, why spend the money? Why not just read their report? And why push for this bill?

There’s a reason the bill has been hung up in the Ways and Means Committee. There is opposition to it. It is clearly aimed at laying the groundwork for a Canadian-style, publicly funded insurance scheme, perhaps with a sales tax to back it up. Is that what the city council in Albany wants? I doubt it, but if not, the council should have refrained from expressing its support. (hh)