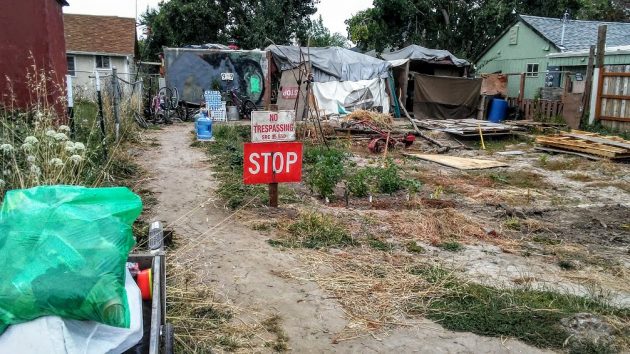 Six months ago, the city of Albany had a contractor tear down the 891-square-foot house at 610 Sherman Street S.E. This month there’s a scheduled court date on the city’s lawsuit involving the site.

The city sued the owner, David Furry, and others last November, asking the court for an order declaring the house to be a “chronic nuisance property” as defined in the municipal code. It wanted the owner and and others barred from being on the property for up to a year.

While the lawsuit languished, the city had the house razed as a dangerous building on Jan. 27. There was a history of code violations and incidents involving police response at the property.

On behalf of Furry, two Legal Aid lawyers filed an amended answer to the city’s complaint on July 8. They dispute some of the city’s allegations about prior incidents at the property and ask that the complaint be dismissed.

Now, a “final resolution conference” in the city’s lawsuit is scheduled in Linn County Circuit Court for 8:30 a.m. on Aug. 24, before Judge David Delsman. Such hearings are intended to make sure a case is ready to be decided.

On March 11, the owner of a rental adjacent to 610 Sherman complained to the city council that even though the house had been torn down, the owner was living in a shed on the property and people were coming and going, making it hard to find a renter for her house next door.

Since then, the back of the lot has sprouted tarps and improvised shelters. There is what appears to be a little garden plot where the house used to sit.

The demolition contractor billed Albany $14,100. The city may foreclose on the lot for that and other liens against the property, but it hasn’t done so. If it does, it may have to get in line behind Linn County, which is owed four years of unpaid property taxes totaling about $5,000.

Whether this month’s hearing in the city’s lawsuit leads to a resolution of this situation, and exactly what that resolution turns out to be, the neighbors will just have to wait and see. (hh)

The original story was edited to include the paragraph about the answer to the city’s complaint.


One response to “Court date coming up in ‘nuisance’ case”