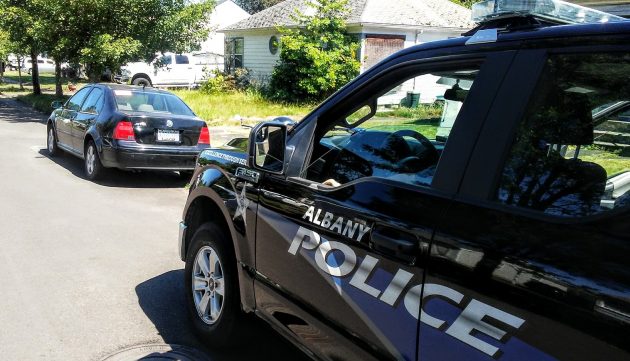 This apparently abandoned VW Jetta parked on Southwest 14th Avenue has just been given a police notice of violation.

Sometimes, vehicles that no longer work are stored on Albany streets for weeks on end, and others multiply in their owners’ front yards. Either way, it’s a violation of the city code, and the police are letting people know.

The proliferation of cars left on the street and accumulating in people’s yards was noticed during the city’s annual cleanup campaign, the Big Pick Up, earlier this spring. The upshot: the Community Resource Unit of the police department launched a campaign on abandoned vehicles and junk cars.

They’ve put together a two-page letter citing city regulations on street parking and “yard vehicles.” The letter also lists resources for disposing of unwanted cars, including four charities that accept vehicles as donations and five options for selling or salvaging junk cars.

I heard about it from Lt. Travis Giboney when I ran into him on Southwest 14th Avenue on Wednesday as he was posting a notice on an apparently abandoned car. Later he sent me an email with more about the program, which is run by the department’s Community Resources Unit and does not involve patrol or other police resources.

“We’ve tried to put a few hours a week into this and cover most of the city,” he wrote, “and so far after about three weeks we’ve sent about 400 letters and addressed about 80 on-street abandoned cars.

“In addition of taking up parking space on the streets, these cars also (prevent) the street sweeper from cleaning the streets, and we often find grass and weeds growing up through the asphalt under some of these cars, which costs us all money in street repairs.”

The letter sent by the department cites sections of the city code most residents of Albany may not know exist.

One classifies inoperable vehicles as junk, and storing junk outdoors is unlawful. People getting a citation have 30 days to get rid of the junk, and a 30-day extension may be granted if special circumstances exist. After that, the city may remove the junk and bill the owner.

Another section says vehicles in daily use may not be parked in the front yard except in a driveway.

No word on results of the campaign so far. But Giboney reports that the effort “has generated some good conversation with our community members…” (hh)


12 responses to “City goes after abandoned and ‘yard cars’”