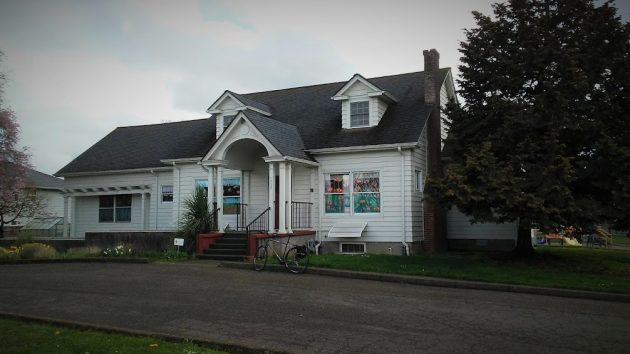 Albany’s Maple Lawn preschool on April 2, after its closure was proposed.

The Maple Lawn preschool can stay open at least another year, and police and fire layoffs have been averted for now, but long-term structural problems in Albany’s city budget remain.

That’s the gist of what I got from another two-hour meeting of the Albany city budget committee Thursday night.

On Wednesday night, the city council had approved a series of fee increases requested by the Albany Fire Department, yielding an expected revenue bump of $900,000 over two years.

Most of this added money will go to the fire department. But $132,000 was allocated toward the cost of running Maple Lawn for another year, allowing that much time for finding a non-profit or other entity to continue the preschool after that. And $125,000 was added to the police budget, which totals $32 million for 2019-21.

City Manager Peter Troedsson told the committee the proposed two-year budget as amended was balanced. But the committee, including the council and seven other citizens, spent a good deal of time chewing over the underlying problem: While tax revenue and other city income is rising, benefit costs are rising even faster, mostly because of increases in pension expense and health insurance.

Police and fire can avoid layoffs under the budget but expect to leave some vacant positions unfilled. That’s a problem especially in the police department, where a number of senior people expect to retire and hiring new officers takes up to year.

Mayor Sharon Konopa wants the city to consider a fee added to monthly utility bills to help support emergency services. She says this would force non-taxpaying entities — churches, health-care facilities and homeless shelters — to help pay for police and fire protection, which together cost more than the city gets in property taxes.

Councilman Mike Sykes suggested not levying all the urban renewal or CARA taxes that could be collected. This would funnel more money to the city and other local taxing districts, and Sykes said he’d like to see the numbers on what effect that would have. Councilor Rich Kellum backed him up, saying it’s a good question that deserves an answer.

It’s up to the committee to recommend a budget to the city council for final action. All the committee did on Thursday was talk. It didn’t vote on anything and plans to meet again at 6:30 Tuesday. Anyone interested in the nitty-gritty can watch live coverage on the city’s website. YouTube videos of past sessions, including the one Thursday, are also posted there. Thursday’s should be available sooner or later, but at 10:30 this morning it’s not there yet. (hh)