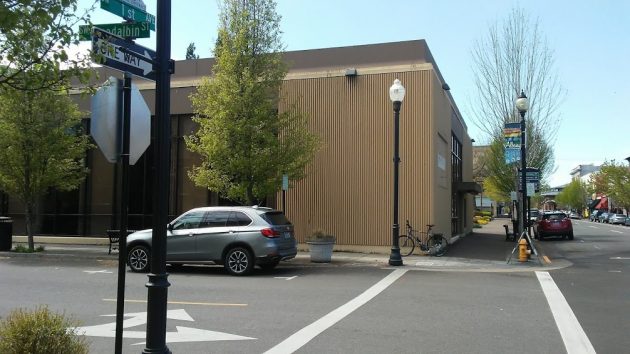 Albany’s urban renewal agency continues to be shy about naming the parties that offered to acquire the former Wells Fargo branch in the heart of downtown. But it plans to decide on selling the building to one of them the next time the CARA advisory board meets, which is June 19.

On Wednesday, the board talked about this without ever naming either of the two groups that made presentations last month in a CARA meeting closed to the public. They also didn’t mention that Linn County, too, had offered to buy the property, for $1.5 million, the same price the city paid in February.

In the audience, though, were Marc Manley, who years ago refurbished the Flinn Block with CARA’s help, and Matt Bennett, the master chef and owner of the renowned Sybaris restaurant.

Manley announced last month, outside the closed meeting, without going into details, that he had plans for the former bank and would like the chance to redevelop it.

This Wednesday Bennett too, also outside the meeting, confirmed that his group had made an offer to acquire and redevelop the building, and that the offer still stands. Everybody around downtown already knew about it anyway, he said.

CARA continues to cloak in confidentiality the financial and other details of either proposal.

Seth Sherry, Albany’s economic development manager, told the CARA board Wednesday no other offers had come in since the property was listed last month. He also said he intended the decision on the sale to be made in public, on June 19, to be followed by negotiating a development agreement with the chosen buyer. The agreement would be in place before the sale closes.

He reminded the board that ARA — the Albany Revitalization Agency, meaning the city council, which governs CARA — is not bound to take the highest offer. Instead, the agency can consider the goals of urban renewal: curing blight, encouraging investment to boost the economy, and raising property values for tax purposes. He didn’t say so, but that would seem to exclude the county’s offer, which would keep the property off the tax rolls. The county wants the building to house the county clerk.

Meanwhile, CARA continues its interest in real estate. On Wednesday the board sent the public out of the room again to conduct another executive session for the purpose of discussing a deal. As provided by state law, a couple of reporters (the local paper and I) were allowed to stay and listen on the condition of not disclosing what was discussed. (hh)


10 responses to “CARA still coy about Fargo offers, but …”