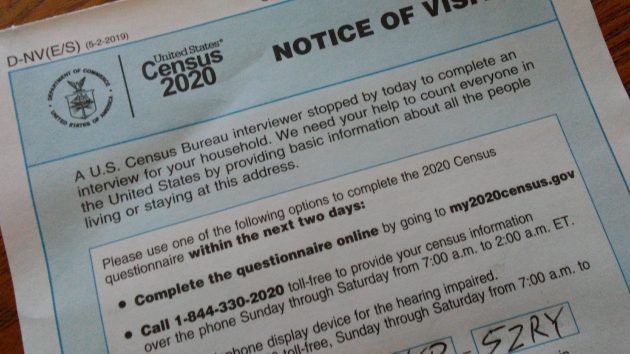 Left at the door, this notice told me a census worker had stopped by.

This year’s head count in Albany may be in trouble if my experience this week is at all representative of how the system works.

A census worker left a notice — in English and Spanish — that he or she had stopped by. The notice told me how to complete the census questions online or on the phone. “Otherwise,” it said, “someone from the Census Bureau may contact you again to complete the interview.”

The notice was a surprise because I had completed the online form for this address months ago.

Undismayed and eager to see the census succeed, I went to 2020census.gov and set out to fill out the online form again. The notice of visit gave me the 12-digit code I needed. But the census software rejected it as invalid and  said that for security reasons this session was now terminated. It invited me to try again by starting a new form.

OK, maybe the hand-printed G on the visit notice was really a 6. Or maybe the 2 was meant to be a Z. I thought I’d try out different combinations. But when I opened a new form at the census website, it turned out to be the form that had already been declared invalid. Several tries produced the same result: No new form.

With no way to do this online, I tried the toll-free number. This sounded promising because the number is said to be operating seven days a week from 7 in the morning eastern time to 2 a.m. the following day.

I called the number. Sad to say, it didn’t work. Following the prompts, I eventually got a message that a census worker had come by. Which I already knew.

This was the second call I had made. The first ended in an extended wait followed by a busy signal that told me the census had hung up.

I would like the census to be reasonably accurate. But I’ve done what I can. If the census people really want to know who lives at the address whose code ends in 2RY, or maybe ZRY, they’ll have to keep trying until they find somebody here. (hh)

8 responses to “Answering the census sounds simple; it isn’t”