Another public hearing on routine repairs 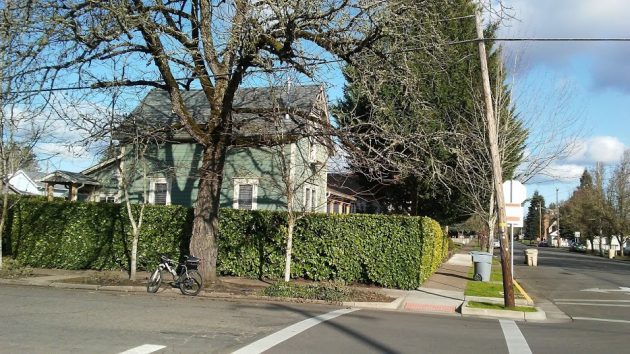 From across the street at First and Main, the alterations at 1105 First would not be visible.

At the risk of beating a dead horse, another story on an old theme: The Albany Planning Division and Landmarks Commission once again have to go through an elaborate and formal procedure to approve minor repairs on an old house.

The owner of the house at 1105 First Ave. N.E. wants to replace the railings on the steps leading to two exterior doors “and associated patios.” Under the Albany Development Code, this requires what the code calls historic review of exterior alterations.

The planning staff has already approved, on its own without a Landmarks hearing, reconstruction of the front porch and railing. The plans changed, and now a hearing on the railings for the steps is needed.

The house dates from the 1890s. According to a survey of historic properties, its porch, railings, stairs, and backyard additions were altered and updated in 1980. So one wonders what’s historic about those railings now.

The Landmarks hearing on this is scheduled for 6 p.m. March 4 in the courtroom at City Hall. First, though, the planning staff has to prepare a staff report. That’s to be available online a week before the hearing. (The first notice of the hearing said the report would be available no later than an hour before the hearing, but that was a mistake, and a new notice will be posted.)

It’s not the fault of the staff or the Landmarks Commission that they have to go through these motions. It’s the code.

There’s no controversy here. In at least a couple of recent cases that were similar –replacing steps in a downtown alley in one case, and a broken garage door and a sliding glass door on a house in the other — there was no public testimony other than from the applicants. And yet the development code apparently required that public notice be given and public hearings be advertised and held.

You’d think that a city council faced with increasing budget pressures would quit wasting time and money on needless procedures and change the code to streamline things. But in this case, you’d think wrong. (hh)


9 responses to “Another public hearing on routine repairs”