Written May 4th, 2018 by Hasso Hering
Comments: no responses. 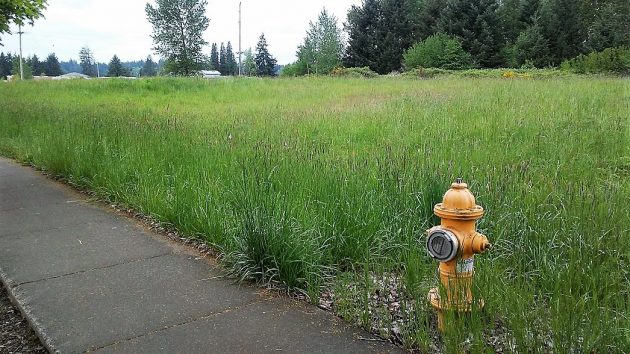 This vacant parcel on the north side of Hickory Street is the intended site of two apartment buildings totaling 40 units.

The Albany planning division has notified neighbors of a developer’s plan to build 40 apartments of “family housing” on Hickory Street in North Albany.

The complex is to be called Sunset Village. It would sit on part of about 2.5 acres bounded by Hickory Street on the south, Ridders Lane on the east, a city-owned parcel containing a pond on the north, and land owned by Samaritan Health Services on the west.

The site plan shows two buildings close to the street, with 68 parking spots and other facilities on the north side of the property.

The zoning is MUC or mixed use commercial, which allows apartments. The applicant, a company based in Wisconsin, is asking for approval of a site plan and a permit for building in the flood plain. Approval is up to the planning staff. The planning commission is not involved, and no public hearing is necessary.

Property owners within 300 feet were notified by mail. They have until May 15 to submit comments, if any. (The notice spoke of “two 40-unit apartment complexes,” but that was a mistake. It’s two buildings with 40 units in total.)

If approved, this will be the second apartment complex in North Albany to get the city’s OK. The first, 48-unit Hickory Hollow on the west end of Hickory Street, is nearing completion and expects to have tenants starting this summer.

For the last three or four decades, apartment construction in Albany was concentrated in the south part of town. Now North Albany is catching up, a little.

A larger North Albany apartment development, possibly around 300 units or more, on nearly 13 acres north of Hickory, has been talked about, but nothing has been filed since the planning commission and city council turned down a rezoning request by Jim Winkler, the property owner and potential developer, last year. (hh) 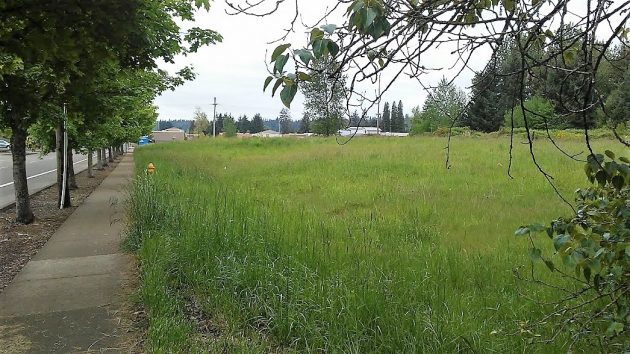 The view west along Hickory Street in front of the planned Sunset Village apartments. In the distance, North Albany Village.