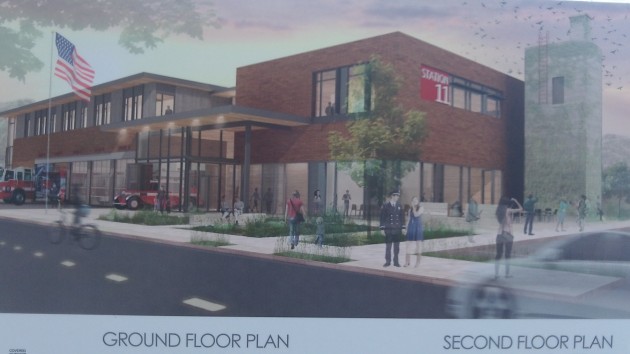 One of the reasons Albany hired the Mackenzie firm of Portland to design new police and fire stations was the company’s  commitment to and experience with a public process in moving the projects ahead. The firm is wasting no time following through.

On three Tuesdays next month, the police department and downtown Fire Station 11 will be open for hour-long public tours. (Details below.) After that, at 7 p.m. on Jan. 27 at Station 11, MacKenzie will conduct a public meeting to hear comments and suggestions for both proposed buildings.

“The expected outcome will be to obtain input from stakeholders and the community to establish a vision for the facilities,” it says in an announcement from City Hall that came out Monday. You’ll have to overlook the jargon associated with a process like this. “Stakeholders”? They mean residents and taxpayers of the city and its surrounding fire districts, all of whom have an interest in these projects. “Vision”? Well, what would people like these buildings to look like? Grand? Imposing? Or so utilitarian as to look ugly or cheap?

The likely answer — whether this is anybody’s vision or not — is handsome enough so passersby don’t gag for the next 50 years but not so fancy that voters will think of them as unnecessarily expensive. As for the inside, the same principle applies: Constructed well enough so the structures will last without wearing out and becoming shabby from use within a few years. But no marble or granite or gold-plated appliances. As for the interior arrangement of rooms and work spaces, we can leave that to the professionals who have to work there. They know what works and what results in wasted motion.

For the police station, my one interior suggestion would be to build the entrancehall in such a way that members of the public walking in, for whatever reason, are not made to feel like hostile intruders. In the wake of recent history around the country, it’s more important than ever for the police and the public to be — and act like — part of the same community. It would be helpful if the lobby of the Albany station could advance that goal.

The city council hopes that this public process will result in substantial voter support for the bond issue it intends to place on the ballot for May 19, 2015. It’s that tax measure (no more than $18 million, much lower than the $20.3 million voters rejected in 2013) that would pay for most of the cost of these projects.

The buildings are needed because the old downtown station is dangerous in an earthquake and otherwise defective, and the police station is way too cramped for the size of the department, and its outdated HVAC system makes it expensive to run. So let the “visioning” begin. (hh)


7 responses to “Albany projects: Got “visions”?”