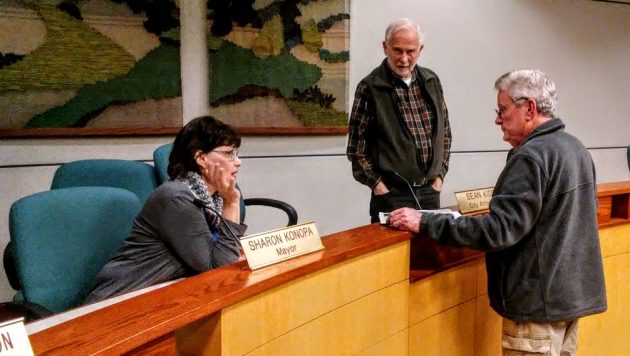 There are not enough votes on the Albany City Council to impose a monthly utility fee to support city services, at least not yet.

After another fruitless discussion about raising money to cover projected budget shortfalls in the next few years, the council Wednesday agreed with a proposal by City Manager Peter Troedsson to prepare a report showing what the results of the shortfall will likely be.

For months the council has talked about how to raise more money or, in the alternative, but in less detail, how spending might be reduced.

The revenue alternatives are to collect a monthly fee for public services such as police, fire protection, parks and the libraries; collect another fee for street maintenance; collect either one or the other or both; ask voters for an increase in the supplemental police and fire tax coming up for renewal in 2020 or the following year; or drop the extra public safety tax and collect the same amount as part of a utility fee instead.

Depending on the revenue target chosen, the fee might run as high as $60 a month.

On Monday the council reached no conclusions and, because Councilman Coburn was absent, decided to discuss it again when he was back.

He’s not in favor of a fee, Coburn said Wednesday, and if the council wants one, it should go to the voters. Judging by what they said before and again on Wednesday, Councilmen Rich Kellum, Alex Johnson II, and Mike Sykes feel the same way.

That makes four members, enough to decide any council issue.

Mayor Sharon Konopa wants the council to settle on  a fee amount and impose it by legislative action. If the council insists on an election, she wants to know who would organize a campaign to get it passed.

The mayor says she does not want to see city services erode for lack of enough revenue. “I want to be able to keep a livable community that we enjoy,” she said Wednesday.

To which Sykes replied: “I want an affordable community.”

North Albany resident Tom Cordier, who’s been retired for years, told the council it should reduce costs by cutting back on personnel the way the corporation did when he worked as a VP at Teledyne Wah Chang. He rejected the idea that payroll cuts have to mean reductions in service.

Cordier reminded the council it would have about $1.5 million more in property tax income this year if it weren’t for CARA, the downtown urban renewal program.

The council has been told that the shortfall for the 2021-23 biennium looks like $11 million. Troedsson says that’s a worst-case projection.

Wednesday’s outcome puts the revenue issue off for now, at least until the city staff comes back with the report on what the effect of cutbacks would be. (hh)