A bit of reflection on ‘hh-today’ 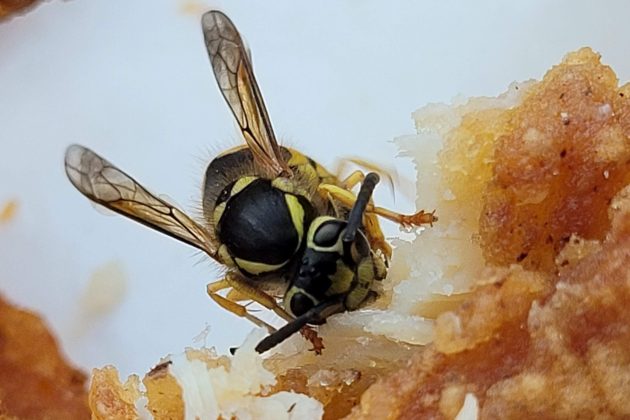 This wasp was gnawing on my picnic dinner last summer. What’s it doing here? Just attracting views to this story.

Hard to believe, but hh-today has been on the internet since October 2012. Time for a little reflection as you and I enter 2022, the eleventh year for this site.

Some of the first few stories, that October, were about what I had seen and had questions about. Like a wire barrier along the median of I-5. Or a huge pipeline in the Santiam Canal.

That, writing about what I saw that interested me, was the main idea then and remains the idea now. But that first month I also wrote about an independent student paper’s lawsuit against OSU, and about controversies even farther away.

I might still comment on wider topics now, but not often I hope.  The farther away something takes place, the less I know or can find out about it, and it shows.

Reader comments have been something I think about. We have them on this site, but sometimes I wonder.

Many of the commenters add value with interesting facts, background, opinion, and humor! Others use a tone so irritating that it leaves a bad taste.

On balance, I think the value of the comment feature is still there, so for now it stays.

I’ve made the mistake over the years (more than once) of coming back at commenters with a snarky retort of my own. I will try not to repeat those mistakes.

It’s hard to remember sometimes. But there’s much to be said for restraint, and for exercising courtesy in public discourse the same as in private life.

And oh, as for that wasp up there, well, it’s a photo I never found an occasion to use. Until now. (hh)