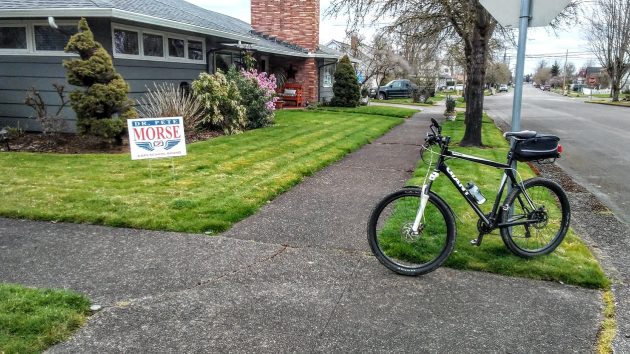 On rides last week and again Sunday, this was the only campaign sign for Albany School Board I had seen. It reminded me that the filing deadline for the May 18 elections was last Thursday, and it led to a surprise.

The surprise — at least to me who doesn’t follow school board developments with the attention they deserve — was this: Come July a majority of the board of Greater Albany Public Schools will be replaced.

July 1 is when new four-year terms on the school board begin. And according to the filings as recorded by the Benton County elections office, three of the five board positions will have new members.

Three present board members, Jennifer Ward in Zone 1, Kim Butzner in Zone 2, and recently appointed Justin Roach in the No. 2 at-large position, did not file as candidates for the board of directors.

In Zone 2, the candidates are Roger Nyquist, chairman of the Linn County Board of Commissioners, and Willard Sheppy.

And for the at-large position, the candidates are Alison Ecker, Pete J. Morse, and Denee Newton-Vasquez.

It was Morse’s campaign sign I spotted at the corner of 11th Avenue and Walnut Street. It refers to him as Dr. Pete Morse. I gather he’s the dentist whose office is on Elm Street

Other than Bricker and Nyquist, I’ve never heard of the others. Benton County did not post the campaign filings of the GAPS candidates, referring people to the Linn County elections office instead. Unfortunately, the Linn County clerk’s website doesn’t show candidates at all, let alone their filing papers.

Maybe the candidates will campaign and let the voting public know what they want to accomplish on the board. And maybe not. Either way, three of them will take office in July. (hh)


4 responses to “Expect three new faces on GAPS board”