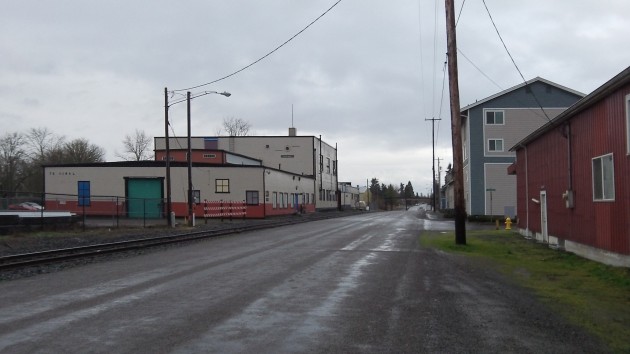 “Vibrant and pedestrian friendly”? It doesn’t seem likely on a rainy day.

About two years ago Albany Mayor Sharon Konopa had the great idea to form a task force that would comb through the city development code and recommend changes to make it easier to open or run a business. On Wednesday the city council will hold a hearing on the result, a list of revisions so long and detailed that it requires a 140-page staff report to explain them.. So much for good intentions.

The recommended changes do indeed relax a number of zoning and sign regulations, but in most cases they also establish procedures and safeguards to make sure the changes don’t go too far or lead to conflicts. What they don’t do is reduce paperwork or simplify the development code in any sweeping way.

They don’t for example, reduce the bewildering number of zoning districts in favor of more general safeguards to keep conflicting uses somewhat apart. But why even keep them apart if there’s no likely conflict? If somebody wants to live in an apartment above his workshop or store, why not? If somebody wants to manufacture widgets in an unused portion of a supermarket, who cares? Why should apartments be in a different part of town from houses? If we just had laws against bothering your neighbors with noise, smoke or trash or by taking away their sunlight, wouldn’t that be enough?

It would not be enough for the governing class, which wants to control how things develop. Consider what the development code says about the zone called “waterfront district”: “The WF district is intended to transition Albany’s Willamette River waterfront into a vibrant center characterized by a variety of housing choices and a mixture of housing, office, and retail uses. Development and design standards will result in great neighborhoods, a pedestrian friendly environment and an enhanced community image.”

No room in that description for what actually has kept the riverfront moderately alive if not “vibrant”: a lumberyard, an old brewery and a new one, a couple of small manufacturers and a hardware outlet for the construction trade, none of which would survive by depending on pedestrians. The zone is unrealistic, to say the least.

Equally utopian is the so-called “Main Street District,” which the council has just used to justify its rejection of a new kind of business, a bottle and can redemption center. The code says the district “is intended primarily as an employment center with supporting commercial and retail services for residents and employees in the area. Retail, restaurant or night uses that impact surrounding residences are discouraged.” (“Primarily”? The city staff thought that meant exclusively.)

And retail services relying mainly on people living and working nearby are doomed in today’s economy. The zoning no longer works, if it ever did. It should be abolished. The plan that emerged from the business-ready task force doesn’t do that, and because of that it falls short. (hh)