Zoning for climate: A questionable quest 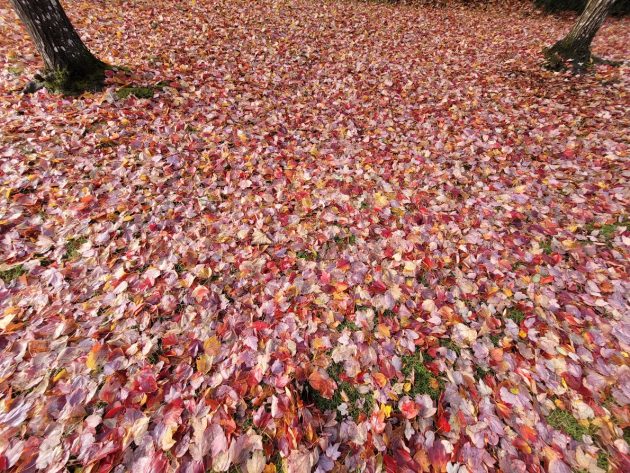 This carpet of autumn leaves in a big yard has nothing to do with “climate friendly areas” Albany and other cities are under orders to create. But it looks kind of cool, no?

Albany and other Oregon towns above 50,000 are preparing to comply with a state order to designate “climate friendly areas.” All I can say is good luck.

I had my doubts about the wisdom of this program when I wrote about it on Nov. 18. At an online public meeting Nov. 30, I didn’t hear anything to dispel my doubts.

The main point, according to the presenters from the Oregon Department of Land Conservation and Development, is to help Oregon meet its goal to get rid of carbon dioxide emissions by various points in time between now and 2050.

Creating climate friendly areas is supposed to help by cutting back on the use of piston-powered vehicles.

But, I’m wondering, if Oregon intends to ban the sale of piston-powered vehicles by 2035, most vehicles of that type should be off the road 10 or 15 years later. Thus, the contribution of greenhouse gases from the consumer part of the transportation sector should be gone by then whether people live in climate friendly areas or not.

In Albany and similar-size cities, the Department of Land Conservation and Development wants at least one 25-acre climate friendly area, with at least 25 dwellings per acre and apartment blocks up to 85 feet high, along with shops and various job sites.

People living in such an area would be able to walk or bike to work, and they would not need a car for most daily errands.

This area would be created, supposedly, with changes in the development code.

But code changes alone won’t do it. The city can’t create jobs or decide where job sites are opened, moved, or closed. Property owners and developers will decide what if anything gets built where based on demand and many other factors in the real world.

In addition, Albany already has the zoning to allow for mixed uses and walkable neighborhoods. These “village centers” develop slowly, as has happened around Hickory Street in North Albany.

This new state-mandated effort to help save the climate with new zoning requirements is unlikely to have any practical effect. So why go through it? Because the state’s land department says so.

If you want more details about the climate friendly areas, the Albany planning staff has put together a helpful summary here. If you read it and reach a different conclusion, I invite you to let me know by leaving a comment below. (hh)


10 responses to “Zoning for climate: A questionable quest”