You don’t see any water, do you? 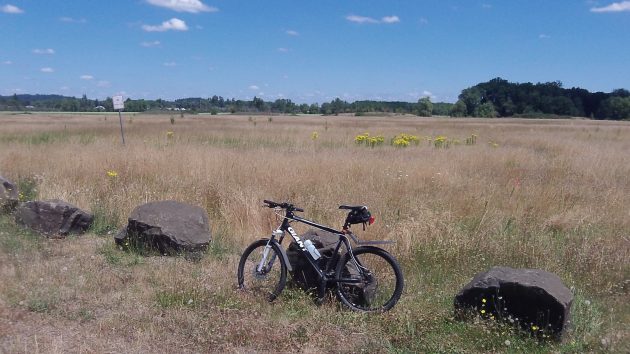 Tax lot 100 at NE Somerset and Timber Ridge: Only the inside of the bike’s water bottle is wet.

Wetlands again? Yes, once again the designation of normally dry ground as wetlands is likely to cost the city of Albany some money.

In late 2010, the Albany council agreed to spend nearly $3.5 million from its Pepsi settlement fund to finance the construction of Timber Ridge Street.for the new Timber Ridge School. The costs were assessed against adjoining parcels including the school site and private land known as the Brandis property. The council invested the Pepsi money this way because assessments by law carried an interest rate of 6.5 percent, while city deposits in the state investment pool earned far less.

When payments on the private parcels fell behind a few years later, the city took ownership of two of the undeveloped parcels — totaling about 52 and 23 acres respectively — in lieu of foreclosure. The idea was that the city would sell the land and recoup its investment in the street project. To that end, the council last December agreed to pay for an evaluation of the property under wetlands rules.

The city says it has received “a handful of inquiries” from parties interested in buying some of the land. But Kate Porsche of the city staff told the council last Monday that the potential purchase prices were below the earnings the city had hoped for when it invested in the street. If that’s the outcome eventually, one likely reason is the discovery of such extensive wetlands.

On both tax lots 100 and 101 together, the assessments plus accumulated interest so far amount to nearly $4.2 million. That’s the amount that Finance Director Stewart Taylor lists as a “receivable” of the Pepsi settlement fund if and when the property is sold. No one knows if the city will get that amount. If not, one of the likely reasons will be the designation of normally dry land as wetlands that, under state and federal rules, must be preserved or recreated somewhere else. (hh) 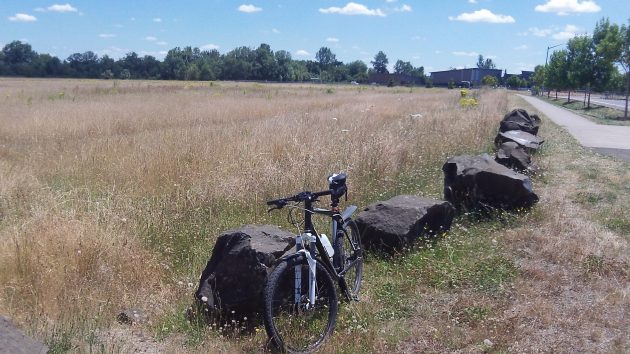 Look at all that supposed wetland, with Timber Ridge School in the distance.