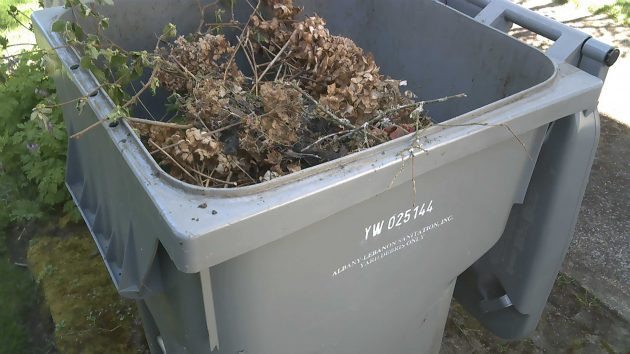 In Albany, Republic Services will start collecting yard debris from carts like this every week.

With the approval of the mayor and three other council members, Republic Services will charge Albany households $2.95 more per month for trash service and start picking up yard debris every week instead of every other week.

The added charge and change in schedule is authorized to start as early as Aug. 1, but several council members suggested September would be better, so it may happen then instead.

The council voted 3-3, giving Mayor Alex Johnson II the opportunity to break a tie. He voted in favor.

Republic wants to encourage residential customers to start adding all food waste to their yard debris, and for that, weekly collection is essential to prevent odors and other problems.

Julie Jackson, Republic’s municipal manager, said in a letter to the council that the change removes food waste from the Coffin Butte landfill and “creates a more sustainable environment, reducing greenhouse gas emissions.”

Emissions? Nobody said anything about the added diesel exhaust as the yard debris trucks, including two new ones Republic will have to buy, make twice as many trips.

As for food waste, Councilor Bessie Johnson said the only time she and her husband have any is when she cleans out the refrigerator.

Republic processes yard debris and food waste at a site on Camp Adair Road in order to make compost to be sold as a soil amendment.

According to Jackson, the Oregon Department of Environmental Quality estimates that food waste makes up nearly 25 percent of our trash. If that’s the case, we’re buying too much food. (hh)