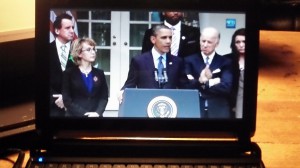 The White House made the president’s remarks available online.

President Obama sounded bitterly disappointed when the Senate failed to get 60 votes for his gun-control ideas including a so-called “universal background check.” He called Wednesday’s Senate vote a shameful day in America. But he was wrong.

He himself bears part of the blame for pushing legislation of dubious merit and then shamelessly exploiting the grief of Newtown and other shootings to promote the cause.

A universal background check may be supported by 90 percent of the voters, but only as long as they don’t think of all that it entails. It would require assembling a colossal databank not just of criminal histories, which we already have, but also of psychiatric records and anything else that bears on whether a person should have the right to exercise a constitutional right.

If a man seeks treatment for depression, should his name go into the database so he can’t buy a gun? Already we’ve read of veterans in their 60s barred from buying a gun because when they were in the service 40 years before they got into a bar fight and pleaded guilty to assault. Almost every week the local paper reports on cases of ex-felons being charged with having a firearm. They got a gun even though they could never pass the background check Oregon already has, proving the obvious: The law on background checks means nothing if you steal your gun yourself or buy it from a thief.

No, far from giving rise to shame, the Senate minority did the right thing in blocking a law that would do little good but then, in the normal course of things, would be followed by other laws clamping down even more. (hh)