Worth a visit any time, even in winter 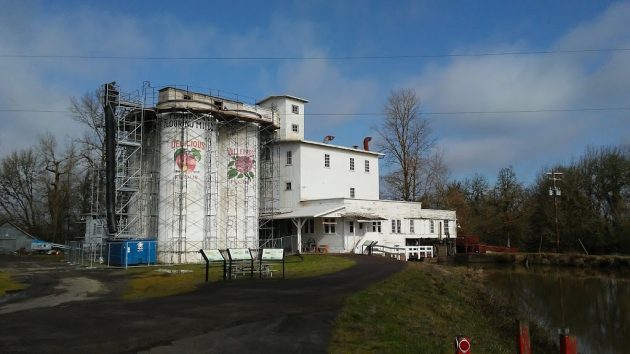 Thompson’s Mills on Thursday, a sunny but cold February day. The silos are undergoing repairs.

There’s no bad day to visit Thompson’s Mills, the state park east of Shedd. And if you’re new to the mid-valley, you owe yourself a trip there. As the only remaining water-powered mill in the state, the place shows off the ingenuity of the Oregon pioneers of 160 years ago.

In a valley that looks as flat as a pool table, the builders managed to create a system of water works with enough head to drive three powerful turbines. One of them still works, and when all the moving pulleys and belts and gears fill the building with their racket, the enormous energy of water power is a wondrous thing to admire.

Oregon State Parks bought the mill and surrounding acreage in 2004 and opened the site to the public three years later. The mill no longer produces feed pellets and has quit generating electricity. A couple of Calapooia River dams have been demolished for the sake of migrating fish, but in 2013 the state installed an adjustable dam. Because of this, there’s enough water coming down the millrace to turn the turbine when visitors show up.

Scaffolding now surrounds the 100-year-old twin silos. Park Ranger Tom Parsons explained that the concrete at the top was beginning to crumble, so repairs are being made. When that’s done, the iconic advertising murals will be refreshed as well.

Elsewhere on the 90-acre mill property, the state is uprooting a plantation of trees the previous owners planted as a commercial venture in the 1980s. The trees are going to Bowers Rock State Park in Albany to help stabilize the banks in a restoration project of old side channels there. One side benefit: Visitors to Thompson’s Mills will regain the view of Marys Peak and the Coast Range, the same view the site afforded in the days of old.

Thompson’s Mills State Heritage Site is open every day from 9 to 4 except on Thanksgiving, Christmas and New Year’s. Another remarkable fact: It’s free. You can park, wander around, and tour the mill and watch it work, all for no fee. And unless he’s busy on something else, the ranger will give you a personal tour. (hh) 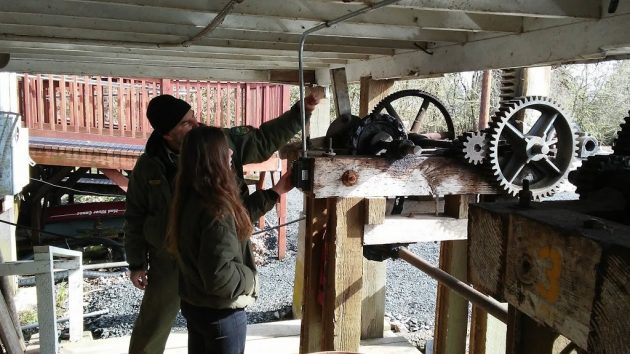 Park Ranger Tom Parsons shows a young tourist how to open the gate holding back water in the millrace. 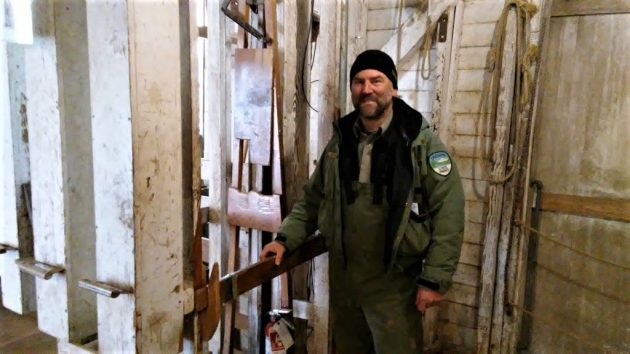 Tom Parsons stands by a one-man elevator that can lift him to the top of the five-story mill in seconds.


12 responses to “Worth a visit any time, even in winter”