Albany scene: Working on the railroad… 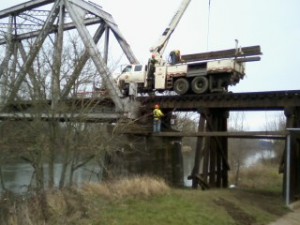 It’s good to see that the Portland & Western Railroad keeps up with maintenance on its rail lines in the mid-valley and, presumably, on the rest of its system. Here’s an example. On an afternoon bike ride the other day, I noticed a crew working on the wooden pilings that support the trestle leading to the railroad bridge across the Willamette River. They had cut at least one of the logs holding up the trestle at ground level, and then they installed a new footing for it. A few days later they had a construction truck on the bridge itself. This is the sort of thing you can see if you walk or bike along the riverside Dave Clark path on a regular basis. It’s a nice route away from traffic, with a pleasant view of the river and the opposite bank. In winter, cold and bare and often wet, nature itself looks a little bleak in that area. But as I say, now and then you spot something interesting, like railroad men at work. A few weeks ago, in the fall, people following that general route could watch as the railroad replaced some cross ties on its old Oregon Electric line along Water Avenue. That, too, was the kind of maintenance work that keeps the rail lines functioning as an important part of our transportation infrastructure. Our railroads, long may they last. (hh)

If you see interesting stuff around town or around the world, send me a small photo and a description of what you saw.