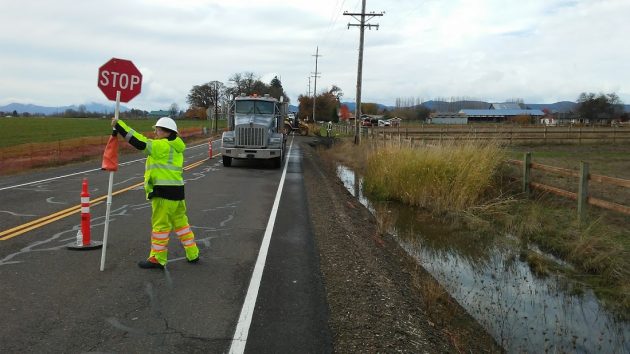 Safety improvements on Riverside Drive are getting closer. On Monday I saw the first construction activity that’s part of Linn County’s move to widen the road.

A crew for Knife River was installing a couple of driveway culverts ahead of widening the road in 2018. Work on the actual widening may start in January or February, depending on the weather, County Engineer Chuck Knoll told me.

Knife River Corp. in Tangent has a $1.9 million contract with Linn County to repave Riverside from Oakville Road just outside of Albany to Meadow Road, 2.4 miles away. The contract has a completion date of June 22, 2018.

The road now is between 22 and 30 feet wide. The project calls for two 12-foot travel lanes and 4-foot paved shoulders on both sides, making a ribbon of pavement 32 feet wide. As is customary, a fog line will mark the outside of the travel lanes, turning the paved shoulders into de-facto bike lanes even though they’re not called that.

As an occasional bike rider on Riverside, I’ve been looking forward to the wider shoulders because in some segments now there is hardly any space outside the travel lanes.

Riverside is about 6 miles long from Oakville Road to Highway 34. The rest of the road may be widened later when it, too, comes up for redoing the pavement. At its south end, Riverside connects with an off-highway bikeway to Corvallis. ODOT finished that bikeway in late 2015.

When all of Riverside is widened, bicyclists should be able to travel between west Albany and Corvallis with less risk of colliding with motorized rigs, especially those with mirrors sticking way out on their right sides. (hh)