Work at Queen crossing: Perhaps in 2022 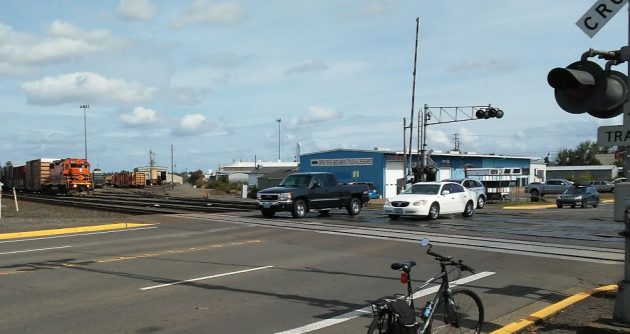 Vehicles bump their way across the four tracks at the Queen Avenue rail crossing on Monday.

The date for rebuilding and smoothing out the Queen Avenue railroad crossing in Albany keeps getting pushed back. That’s what emerged from an update the city council received on Monday.

As recently as April, both the installation of new crossing protection and rebuilding the pavement between the rails were scheduled in 2021. Now it appears it will be the fall of 2021 when ODOT opens of bids for installing the new crossing arms and other safety improvements. That means the construction probably won’t happen until 2022.

ODOT is planning to replace the crossing arms that span half the width of the street with “quad gates” that cover the entire width, from both sides. That’s to prevent fatalities that happen when someone goes around the still-down crosing gate thinking the track is clear because the switch engine has passed, and then gets clobbbered by a train moving on the main line.

Transportation system analyst Ron Irish briefed the council Monday on the latest schedule. He also asked whether the city staff should initiate a request to establish a quiet zone at the Queen Avenue crossing. The council consensus was to wait to pursue that idea until the improvements are in place.

A quiet zone, possible only if quad gates are installed, would require the consent of ODOT, the two railroads using the crossing, and the Federal Railroad Administration. Once the zone is established, freights and passenger trains could go through without sounding their horn. But as Irish understands it, switching operations would still require at least some use of the horn as a signal to workers in the yard.

Long story short: It’s probably three years before the notoriously bumpy crossing is made smooth, and longer before there’s a quiet zone, if the council tries at all. (hh)