Woodland Square on track to start 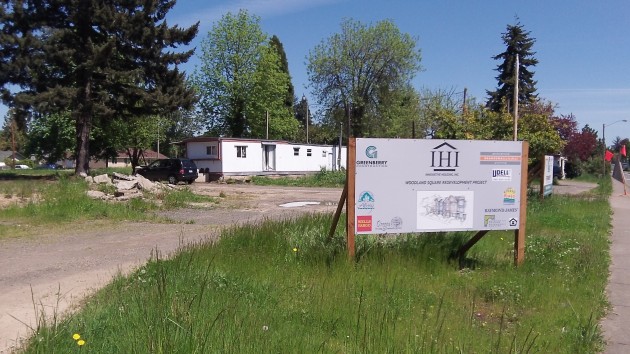 In the background is one of the two trailers remaining on the site.

The transformation of Woodland Square, the dilapidated trailer park on Periwinkle Creek in Albany’s Willamette Neighborhood, is about to start in earnest. Seventeen trailers used to be there, and only two remain.

“Both these folks have places to go,” says Julie Garver of Innovative Housing Inc. “They will be moving in the next couple of weeks…” 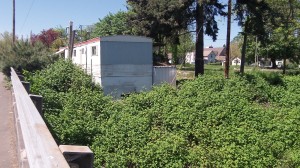 And this is the other one.

In an email Garver goes on: “We are hoping to start demo and site work in June and the buildings in July, depending on permit issuance. Very exciting!”

The Portland-based developer of “workforce housing” will build a 54-unit apartment complex on the 2.1-acre site. The $10.8 million project is getting $1.45 million in aid from CARA, the Central Albany Revitalization Area. Part of the rest of the financing is based on state and federal tax credits that IHI is using to lower the interest rate on a mortgage.

The company has said rents may start around $450 a month for a one-bedroom unit. The site is between Salem and Second Avenues and Pine Street and Periwinkle Creek.

Woodland Square will be the second big CARA-supported housing project to start in the Willamette Neighborhood this year. The other is Edgewater Village, the riverfront subdivision between Water Avenue and the Dave Clark Path west of Main Street, where utility excavations have churned up the site. (hh)


2 responses to “Woodland Square on track to start”