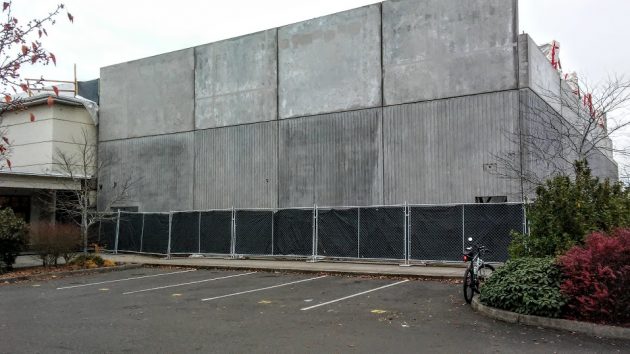 The north wall of West’s auxiliary gym as it looked on Nov. 12.

Under an overcast sky on a November afternoon, the concrete tilt-up walls of West Albany High School’s new auxiliary gym look perhaps even grayer than they might on a sunny day. I wondered if the building will be painted when the construction is finished, or if that’s the way it’s going to look from here on out.

The gym building faces Liberty Street on the west side of the school and, on the north side, the parking lot you see in the photo above.

The original design below, looking at it from the west, made the walls look kind of elegant and attractive: 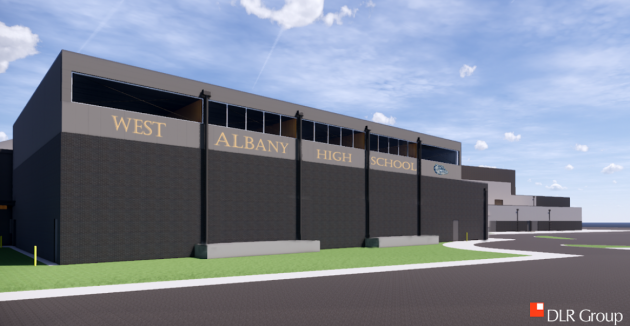 There’s been a change, though, as I learned in an email from James Franks, senior project manager for HMK Company, the school district’s representative for the districtwide school construction and renovation effort.

Franks supplied the original rendering for the new gym shown above, and he added: “The brick façade has been replaced with form liner, yet the smooth surface above has not changed. It will be sealed and sand-blasted concrete and will not receive any additional color.”

“Form liner” means the ribbed pattern you see in the concrete, applied as the name suggests via a liner in the forms when the panels were cast.

So it sounds as if gray is the color it’s going to stay. No word on whether the school’s name is still going to be emblazoned on the west wall as the rendering shows.

For an update on all the Albany school construction projects, including the $55 million expansion and remodeling of West, you can wade through the school board agenda packet for Oct. 28 here. The status report on all the projects, as of the end of September, starts on page 57. (hh)


17 responses to “Wondering about color at new West gym”