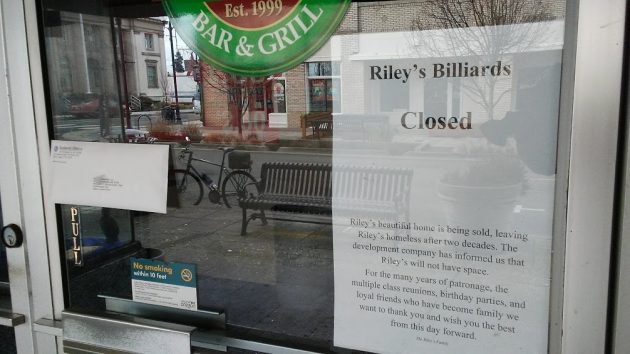 A law firm’s letter addressed to the operators of Riley’s was taped to the Broadalbin Street door of the now-closed bar & grill.

Forty-some years ago, 124 Broadalbin Street in Albany was he address of The Broadway, a fashionable women’s clothing store with a little restaurant on the mezzanine. For the last 20 years it was Riley’s Bar & Grill, which closed after New Year’s, and the historic building’s future now is unknown.

Signs inside the doors on Broadalbin Street and around the corner on Second Avenue thanked Riley’s customers and said the building was being sold. On the Broadalbin door on Jan. 9, there was a letter taped to the glass. It was from a local law firm and addressed to Walt and Janet Relf, operators of the bar & grill.

When I reached him by phone today, Walt Relf said lawyers were involved and he’d been advised not talk about the circumstances.

Linn County tax records show the building is owned by Mike K. Duckett, who according to his newspaper obituary died last Feb. 11 at the age of 61. The records list no new owner. They do show that the county is owed more than $18,000 in taxes on the property for the three years 2017 through 2019.

Riley’s also was where the Albany Elks Lodge met on Tuesday nights. The lodge is working on finding another venue. The member I talked to said the rumor was that the building might be converted to apartments upstairs and retail uses on the ground floor.

At City Hall, officials said no one had filed any site plans or building permits for the property. Nor had there been any inquiries about, let alone requests for, redevelopment aid for the historic structure under the downtown urban renewal program.

The building is in Albany’s Downtown Historic District. In a pamphlet about the district, the Albany Visitors Association says businessman Samuel Young built the structure in 1912 as a clothing store. It was designed by Charles Burggraf, the architect responsible for many of Albany’s landmarks.

Relf told me he was not planning to reopen Riley’s somewhere else. As for the future of the building itself, we will just have to wait and see. (hh) 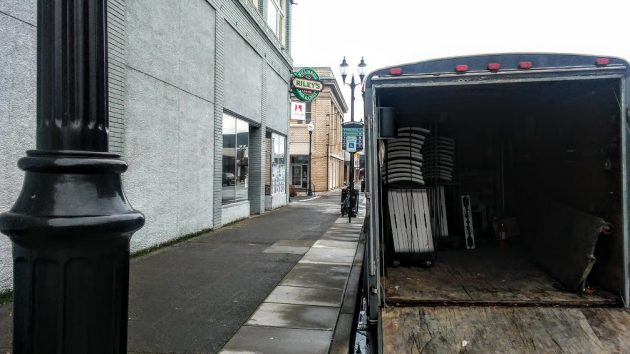 The scene outside Riley’s on Jan. 5.