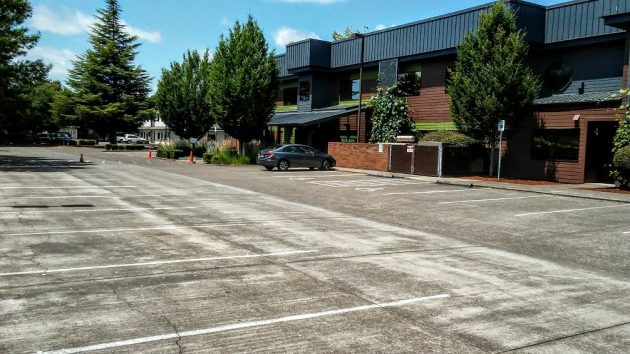 Only one car (mine) was in this part of the lot at the main Albany Public Library on the afternoon of June 29.

If you’re waiting for the public libraries in Albany to reopen, you’ll have to wait a bit longer. The wait may have driven you to your own supply of printed books, rereading old favorites or tackling long-ago gift books for yet another try.

I had asked Eric Ikenouye, director of the Albany Public Libraries, when one might once again be allowed to wander among the shelves and browse titles for something interesting or new.

Not yet, it appears. “I expect to be able to have an exact date soon to provide some limited access to our libraries,” Ikenouye replied by email on June 30. But he pointed to efforts to get readers and books together in other ways.

“Not being able to browse the shelves is undoubtedly a limiting factor,” he said. “However, the holds pick-up is helping to get materials in many patrons’ hands. Curbside started small, and we have been scaling up our availability to try and meet the patrons’ demands. We began offering holds pick-up at the Farmers Market last week, and we are doubling the patrons we can serve there this weekend.”

That would be today, Saturday. Check out what they have at the Farmers’ Market in the City Hall parking lot, which usually lasts till 1:30 or so.

As for me, I scanned my shelves to see if there was something worth rereading. Yes, there it was, way to the right on the top shelf, hard to see in the photo unless you know it’s there: 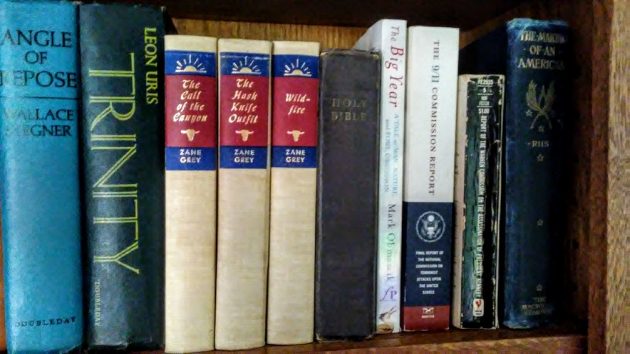 Riis came to America from Denmark in about 1870, had great difficulties getting going, survived for a while as a homeless tramp, eventually became a police reporter in New York, and with his writing and photography spearheaded the drive to clean up that city’s slums.

This is not his most famous book. That honor probably goes to “How the Other Half Lives.” But I treasure it because of the author’s life story, his sentiments about America, and his prose.

I found this volume at the Book Bin many years ago, when that business still had a store on West First Avenue. According to the name on the inside, the book had once belonged to Harley K. Hallgren. The name comes up on Google as a native of Minnesota who moved to Portland in 1910, worked for the railroad and after retirement as a travel agent, never owned a car, wrote histories of his church and other subjects, and died in 1976 at age 84.

I don’t know if it was that Harley Hallgren who owned and read Jacob Riis’s autobiography. But I’m grateful to him or his namesake for taking care of this volume so, now and then, I can read it again even though it’s almost 120 years old. (hh) 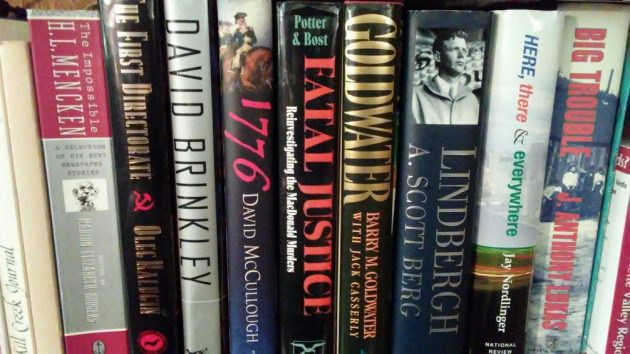 Other books that wait to be reread or, like “Big Trouble,” completely read for the first time.


7 responses to “With library closed, rereading an old gem”