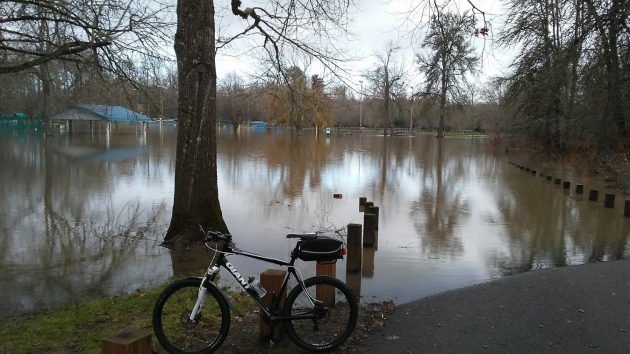 Bryant Park at 1:25 this afternoon.

It took less than 24 hours for Albany’s Bryant Park to fill with river water once the Willamette and Calapooia rose from Monday night to Tuesday morning, as I discovered on a bike ride about 1:30 this afternoon:

The wintertime flooding of Bryant Park is a yearly event,  and this year it came right on cue at winter’s official start.

Rick Barnett, the park maintenance and facilities manager, points out that the high water doesn’t do any damage to the park, but the road is closed of course.

“We probably won’t reopen to traffic until after we do some planned tree work in the park in late January,” Barnett told me.  The work involves some trimming on the west side of the park near the road. “We also have a couple of big trees that need some weight taken off of them. ”

So winter has arrived in Bryant Park. Until the park drains again, it will remain mostly the domain of ducks. (hh)

7 responses to “Winter starts as Bryant Park fills, on cue”