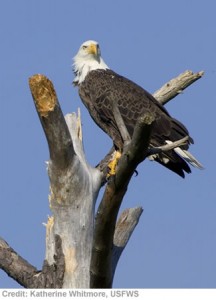 A bald eagle on the website of the U.S. Fish and Wildlife Service.

The Obama administration has let it be known that expanding power-generating wind farms is more important than protecting golden and bald eagles. Federal officials announced on Friday (Dec. 6) that wind power companies will be allowed to kill or injure a certain number of eagles for up to 30 years without penalty.
Eagles are federally protected, and because wind farms inevitably kill some, they need permits to do so. Until now, these permits were good for five years. Now the administration will issue permits for 30 years.

The industry says wind farms are involved in less than 2 percent of human-caused eagle deaths, and the new rules will still require reviews every five years, and if more eagles are killed than expected, new restrictions could be imposed or permits could be canceled. Shutting down wind farms is not likely, though. As long as wind energy remains a darling of the government, getting subsidies and favorable laws, wildlife is just going to have to suffer.

According to a recent study, U.S. wind farms kill an estimated half a million birds and more than 800,000 bats a year. In the Northwest, the government has sharply curtailed logging on public lands in order to save a few thousand spotted owls and marbled murrelets. The birds running into windmills don’t seem to get the same respect. (hh)

It’s worth noting, though, that in November, In the first case of its kind, a company, Duke Energey Renewables, pleaded guilty to killing birds at wind turbine farms in Wyoming and agreed to pay $1 million as punishment. The company admitted violating the federal Migratory Bird Treaty Act in connection with the deaths of more than 160 birds, including 14 golden eagles between 2009 and 2013 at two Duke sites in Wyoming with 176 wind turbines. (hh)


One response to “Wind farms versus eagles”