Wind and sea, and research information too 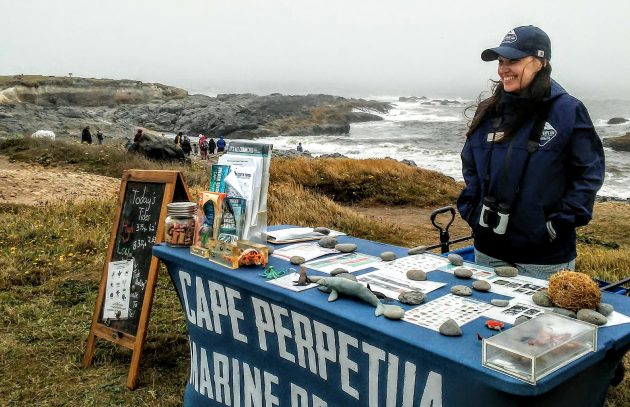 Kristin Bayans, a volunteer with the Cape Perpetua Collaborative, was ready Saturday to tell people about the “marine reserve” off the coast.

On a short bike ride along the coast north of Yachats, I ducked into Smelt Sands State Park. There, a volunteer with the Cape Perpetua Collaborative was patiently waiting in a stiff cold  breeze, ready to tell visitors about the reach of the Pacific Ocean behind her back.

That part of the sea is the Cape Perpetua Marine Reserve, one of five such areas off the Oregon coast authorized by the legislature in 2009. This one is 14 square miles of ocean with a depth ranging from zero at the shore to 164 feet a little ways out.

I talked a bit with Kristin Bayans, the volunteer at Smelt Sands Saturday, and later looked up the Oregon marine reserves online.

The reserves were designated for research and are off limits to extraction, meaning no taking of any animals or seaweed, and no ocean development.

As Kristin explained, this policy applies only in the marine reserve proper, from Cape Perpetua to Ten Mile. “Bookending the Marine Reserve proper are two Marine Protected Areas and a Seabird Protection Area,” she told me in an email later. “These allow some take.”

One feature of the reserve off Yachats is that it has an isolated small rocky reef in deep water. The reef is too deep for scuba diving, so researchers check on the creatures there by other means.

There’s a whole lot more to be learned about these reserves and what the research has shown, and you can do that by going here.

Or you can show up at Smelt Sands and talk to the volunteers of the Marine Reserve Ambassador program, such as Kristin, on any weekend through the Sunday before Labor Day.

They also have a related program, giving tours of the tide pools during low tide. Information on that is available on the collaborative’s website as well. (I had assumed some people  clambering down the rocks were on one such tidepool tour, but Kristin said they weren’t part of the tidepool ambassador program.)

Under a dark sky at mid-day, the north wind didn’t budge the papers on Kristin’s table, weighted down as they were by rocks. But it gave me a nice assist when I got back on the highway and pedaled south. (hh)

The original story has been edited based on further information. 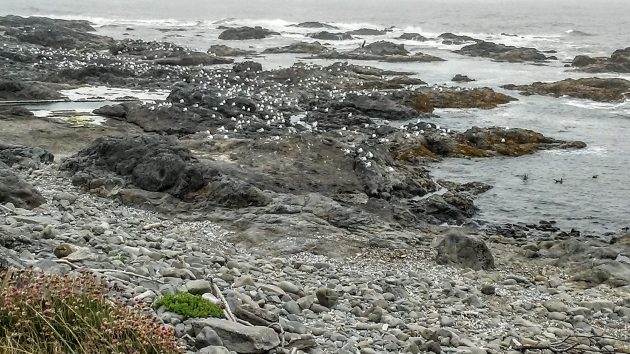 All those white dots are gulls, hunkered down on the rocks on a windy day.


3 responses to “Wind and sea, and research information too”