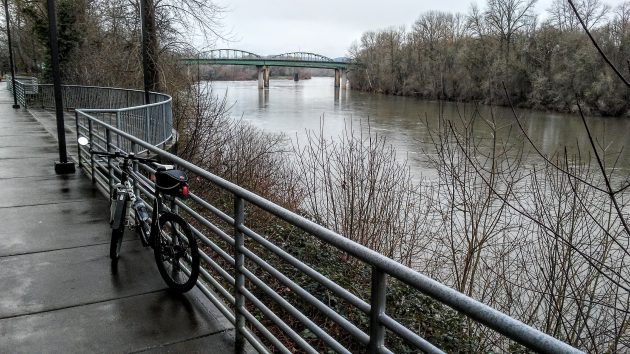 On a gray Saturday afternoon, the Willamette River flows through Albany on Jan. 30.

We’re supposed to be concerned about — or at least interested in — the water quality in our rivers. But if you’re looking for up-to-date summaries on the Willamette from the Oregon DEQ, you’re out of luck.

At the moment, in mid-winter with the river running high and muddy, the water’s quality may be of secondary interest. But come summer, boaters will again be all over the river and bathers will cavort in the shallows at the riverside parks. What can we tell them about the water in which they are playing?

On the website of the Department of Environmental Quality, you can find a report card on the health of the Willamette River.

The report card was assembled by the Fred Meyer Memorial Trust, and it’s kind of reassuring. Based on numerous categories from fish and temperature to flow and water quality, the river is said to rate a B in the upper river to Albany, and also along the middle stretch from Albany to Newberg. From Newberg to the Columbia, it’s rated C+.

That sounds pretty good. The trouble is that the report card, even though it appears on the DEQ site now, is based on information from 2015.

This Jan. 19, the DEQ issued a statement that the levels of pesticide residues in several Oregon watersheds had shown a drop over the years. The report was based on data from 2017-19, but its main shortcoming as far as the mid-valley is concerned is that the Willamette was not part of the study.

What prompted me to think about this was a question from a reader, who wondered about the manhole covers in Albany with the design of a salmon on them. These covers have been around for a number of years and are supposed to remind us that what we put down the drain ends up, in one form or another, in the river.

That’s a useful reminder. But we could also use more timely information about water quality during the recreation season.

Think about this: If you get blood drawn at your local Good Samaritan lab in the morning, they send you the results on dozens of different items by that afternoon. Maybe it would not be too much to ask to have our main waterways monitored more often and the results posted online in a timely way.

Then, information about water quality would be useful to boaters and swimmers before they get wet. (hh)