Driving on the Alsea Highway through the Coast Range is a blast — especially when there’s no one else on the road except some vultures having a roadkill snack. So why did ODOT have to spoil it, maybe, by calling it a “scenic byway”?

The Oregon transportation department made the announcement last week. There are now 29 designated scenic byways. And the road between Waldport and Philomath, something like 60 miles long, with spurs to Marys Peak and Alsea Falls, is one of them.

The idea is to encourage tourists. Which is just great. As if on summer weekends we don’t have enough people in RVs moseying along at 40 miles an hour gawking at the scenery. As if there weren’t enough people unfamiliar with the route and standing on their brakes at every slight turn in the road.

ODOT has done a great job maintaining the Alsea Highway. The pavement is in good shape. For the layout of this gently winding highway, we have to thank mainly the Alsea River, which carved the valley the road mostly follows, but also Mike Bauer, the highway engineer who built it early in the last century. There used to be a plaque explaining his role at the Mike Bauer Wayside. (I haven’t stopped lately, so I don’t know if the sign is still there.)

There are a lot of good and pleasant aspects to this road, especially when the traffic is light, as it often is. Picturesque qualities abound, certainly. But putting a “scenic” label on it and listing it in a brochure for tourists won’t enhance the road. If there is any effect at all, and if the effect is more traffic, that’s likely to be detrimental instead. (hh) 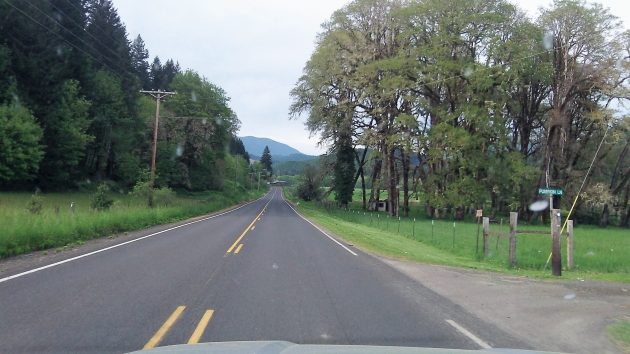 Highway 34 outside Alsea was blessedly devoid of traffic on Saturday evening.