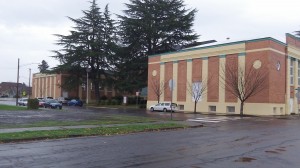 No marijuana clinics within 1,000 feet of this or any other private or public school.

Some city officials in Oregon are worried about medical marijuana dispensaries opening up in their towns under House Bill 3460 passed into law this year. They don’t have anything to worry about, because under the rules being written by the Oregon Health Authority, those facilities will be more secure than Fort Knox and be run with exceedingly tight state controls. The rules may even deter would-be operators from trying to start one.
The rules start with a fee of $4,000 just to apply for a state license. Renewal then would cost another $4,000 every year. Dispensaries would not be allowed within 1,000 feet of any public or private school, including “career schools,” or within 1,000 feet of each other. They would have to be situated on property zoned for industrial, commercial or mixed use or agriculture.

The rules require an alarm system and a video surveillance setup that allows anyone inside, and anyone within 15 feet of the doors outside, to be visually identified.

Adding all that up means that setting up a dispensary will not be cheap. To recoup their investment, operators would have to charge a certain price. The upshot: Medical marijuana patients may find it less expensive to use their present suppliers or grow their own, in which case dispensaries as a business are doomed. (hh)